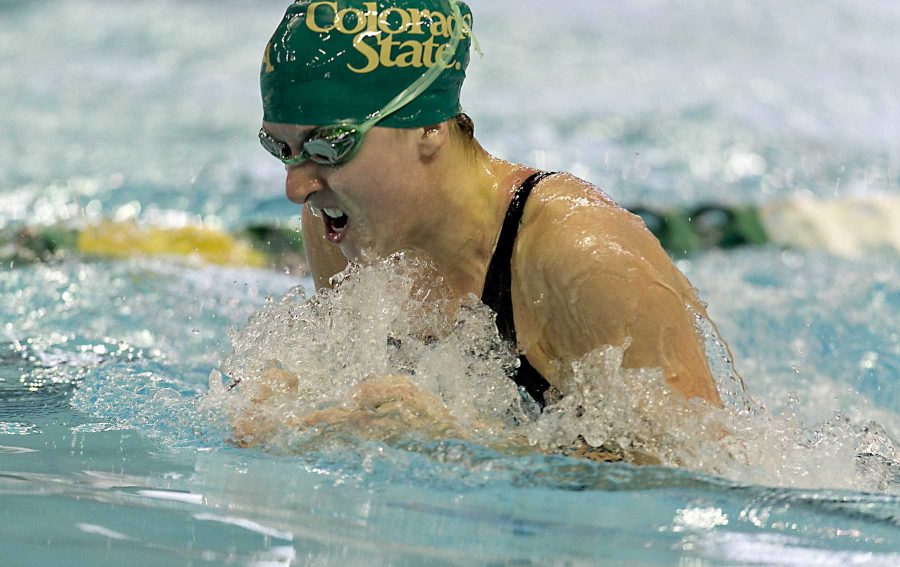 Michael Phelps has a shadow. With 50 yards to go in the 200 butterfly, Colorado State’s Megan Lloyd was a couple of lengths behind Air Force Academy’s Gabriel Aranda. In Phelps-like fashion, Lloyd pulled ahead in the last seconds to take first place.

“She is a tough little girl, she likes to pour it on at the end,” head coach Chris Woodard says of Lloyd’s finish. “I wasn’t necessarily anticipating the first place, but I don’t sell her short, I wouldn’t put anything past her.”

The Rams ended up losing 176.5-123.5 to Air Force on Saturday, but individual performances like Lloyd’s laced a silver lining around CSU’s last home swim meet of the season.

Despite the loss, CSU finished with their best record since the 2009-2010 season. Led by primarily underclassmen, the Rams improved last year’s 2-7 dual-meet record to 6-5. It’s easily the best record for third year coach, Chris Woodard, but he is far from satisfied with the performance of his team.

“We fought hard today,” he said. “I think there were definitely some bright spots, but there were some missed opportunities, for sure. We’re not rested and I know we’re injured. We had a couple girls I had to pull out of events, we have a couple girls either heading into illness or recovering. The clock doesn’t care about that, though.”

Though Woodard did not use it as an excuse, his girls are at the peak of their training, both in the pool and in the weight room. Their bodies are fatigued at this point in the season as they try to up their weight and increase their distance and training time.

In a week or so, they will begin to taper, lightening their workload in preparation for the Mountain West Conference Championships on Feb. 19-22.

“Right now they are extremely tired and worn out, so they are swimming well for this part of the season, it’s all downhill from here,” assistant strength coach Tracy Ljone said.

This year’s MW Champs are especially important for sophomore Jessica Shepard. She has been consistent for the Rams all season and performed well again Saturday afternoon.

Her relay, the first event of the day, placed first, which she followed by another first place finish in the 100 backstroke. She then took two second place finishes in the 200 backstroke and the 200 IM – considered one of the toughest events to swim.

“You have to be really versatile and willing to do a lot of nasty training to be an IMer,” assistant coach Mackenzie Brown said of Shepard. “She brings that to the table for us, so as a coaching staff, we are just looking to see how many points she can score us, how far she can take our relay.”

Shepard and the rest of her young up-and-coming teammates will have their chance to avenge the loss to the Falcons as well as the other nine MW teams  in San Antonio, Texas during the Mid-February Championships.