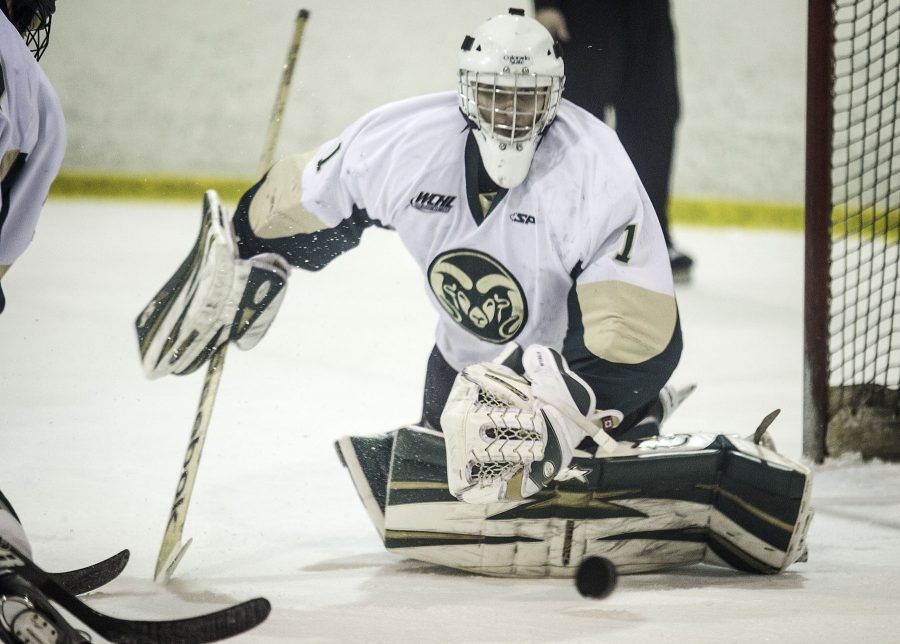 CSU goaltender Alex Steidler (1) successfully blocks the puck during Friday night's game against Arizona State. The Rams lost to the Sundevils in a shootout after a close game.

Fights between players, exchanges between referees, coaches and players getting ejected and an 8-round shootout described CSU hockey’s three-game weekend series against No. 1 Arizona State and No. 12 Arizona.

CSU began the weekend by defeating Arizona 4-2 on Thursday, but fell to ASU 6-5 in an 8-round shootout on Friday followed by a 9-1 defeat on Saturday. The Rams were able to compete against ASU’s best until they ran out of steam in the second period of Saturday’s game against the Sun Devils.

“Well you know what, we gave it everything we had last night (Friday) and we burned some players out by playing them a lot and tonight (Saturday). We could tell in the third period they just did not have much left in them,” head coach Ken Fikins said. “They (ASU) are a good team. They are going to win the National Championship, no doubt in my mind.”

While exhaustion was the deciding factor on Saturday, the Rams forced the best team in the WCHL Division I conference to overtime on their home ice on Friday. CSU battled neck-and-neck with ASU. When the Sun Devils went up 5-3 heading into the third period, the Rams relied on goaltender Alex Steidler to keep them within striking distance.

“Steidler is a stud. At the end of two periods, I asked him if he wanted to come out because I know he was tired and he said, ‘No I want to finish this’,” Fikins said. “That is the kind of player he is. He wants to play every minute of every game and it does not matter what the score is.”

From the first game of the 2013-14 season, players and coaches have been able to acknowledge the fact that Steidler was their team’s secret weapon.

“We would have been lucky to win a game (without Steidler),” Fikins said. “He has been carrying us all year long and I still think he is one of the best goalies in the country by far.”

Thursday’s face off against Arizona was CSU’s most physically-demanding test, as the Wildcats were out for revenge after the Rams claimed two wins in Tucson earlier this season. Two players and one coach were ejected from the Arizona bench, as well as CSU’s Collin Abitz for fighting, resulting in one-game suspensions.

“They came at us and were in our ear,” forward Kevin O’Donnel said. “They were hitting us a lot and trying to get us off our game but it was fun and that is why we play hockey because of the physicality. It just goes to show how good our team is, to come out here and not only beat them in their (Arizona) rink twice but to come back here and back it up with another. It is a celebration for our team.”

In front of friends and family, CSU honored seniors O’Donnell and Kyle Nitchen prior to the puck drop on Saturday. Both have played for the Rams for a full four years at CSU.

“I wanted to have fun in that game and make my last memory of CSU hockey a good one,” Nitchen said. “This season has been frustrating, but we have taken a lot of positive things from it and that is all we are doing is just learning and getting better. We are going to be fantastic in the upcoming years, definitely a nationally-contending team each year.”

Next Up: CSU has one regular season game against North Dakota State University on Saturday Feb. 15. The puck will drop at 12:15 p.m. at the NoCo Ice Rink.

Hockey: Wolverines rout No. 25 Colorado State, romped by No. 18 Oakland – UM-Dearborn in midst of playoff push