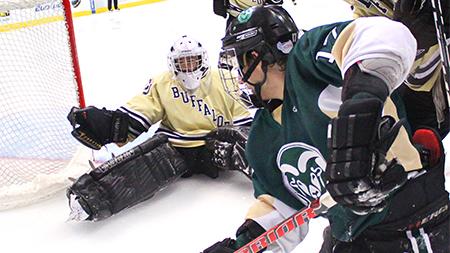 It all came down to the stick of defensemen Kyle Robison. In the seventeenth minute of play in the final period of Friday’s game, Robison hammered a line shot into the back of the net.

The tension between in-state rivals CSU and CU–Boulder has been building since the two last faced off on Nov. 8, when the Rams fell 2-1. Skating at the Budweiser Event Center in front of an orange-out crowd, CSU turned the tables on the Buffaloes with a 3-2 victory to take a 2-1 lead in the season series.

“That was fantastic. Like I said, I can’t really describe the feeling. It was awesome to be with the guys and celebrate,” Robison said.

CSU beat Boulder because it came out in the first period and controlled the puck, took advantage of offensive strikes and the defense of goalie Alex Steidler in net.

“Coming into it, we knew they were a more skilled team but with this atmosphere it’s easy to get back up in these games with the fans here,” CSU forward Nate Strah said.  “It’s fun for us to play the bad guys for us and fun for the fans. We know what to expect from them and know their goalie is solid, so we knew we had to get shots on net early.”

Without the dives, glove and stick handling of Steidler, CSU would have suffered an all too familiar fate of defeat. From the start of the season, the Rams knew the stable force they had going for them was Steidler in net. Friday at the BEC, proved that to be one of the deciding factors blocking 24 of CU’s 26 shots on goal.

“We know with Alex in net, if we can get two goals we are going to win,” head coach Ken Fikins said. “The last month we have had a tough time doing that and tonight we finally scored some goals and he did his job and we got a win. It is a big one for us.”

While blocking shots kept the Rams in the game, the offense came out from the start of the first period until the final minutes of play.

This type of a start has been what CSU has been waiting for all season. When the Rams led into the final period, it was 20 minutes between a victory and a seven-game losing streak for CSU.

“This is absolutely huge for us,” assistant captain Luke Figel said. “The guys are just amped up.”

CSU led 2-1 until the 13th minute when CU’s Nate Grush found the puck that fell out of the arm of Steidler. Grush made contact with the net, tying the game at two. As the clock continued to count down, a flash back to the Pepsi Center game on Oct. 19 came into focus — a tie game into the final seconds.

With 1:12 to play in the final period, CU called a timeout hoping to alter the momentum of the Rams and tie the game, but was unsuccessful.

The rink was full of physical play, several pivotal power plays for both teams and a couple fists. The team that took advantage of the power play and the chances to make fast turnover was the winner in the BEC.

“We did not play as well as we thought we were going to,” CU defensemen Hurley Kane said. “It just was not a good game we did not have our legs under us.”

A rematch is scheduled between CU and CSU on the road in the Buffaloes’ new arena: the puck is scheduled to drop at 8 p.m. Saturday, Feb. 1.

“We are definitely going to jump on them early because that seems to work to our advantage,” Kane said.

Collegian Assistant Sports Editor Haleigh Hamblin can be reached at sports@collegian.com and on twitter @haleighhamblin.