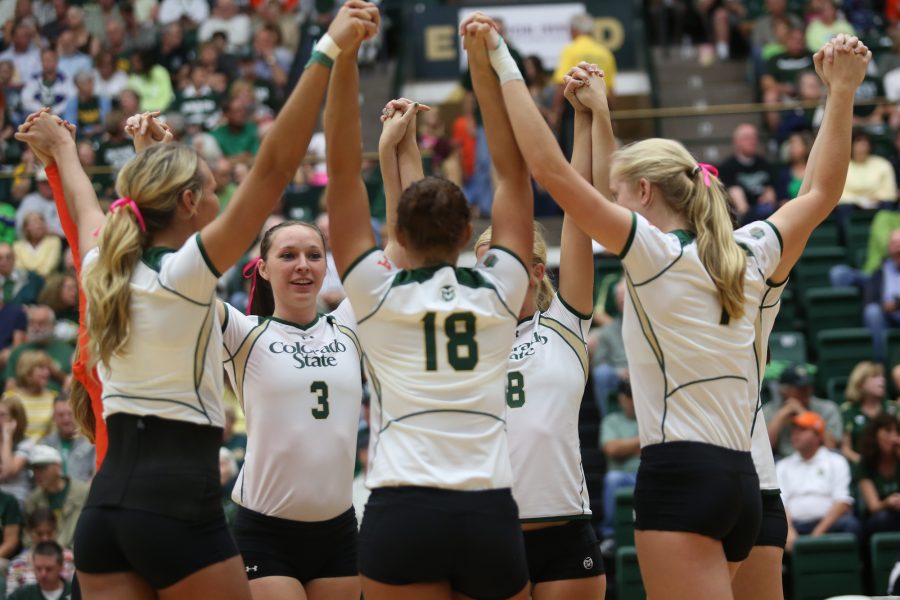 Everyone has seen the Bud Light commercial about superstitions: the basement, the song, the perfect spot on the couch, Ramses – it’s only weird if it doesn’t work. The athletes at Colorado State are of that same mind, sporting a gaggle of strange pregame habits they would not, or could not change.

Cassidy Denny, a freshman on the record-breaking women’s volleyball team knows a thing or two about weird traditions. Before her first game of the season, she saw the fluorescent lights of the locker room replaced with strobe lights and a disco ball. The music began to blare in her ears and she was instructed to dance inside a circle of her older teammates.

“At the beginning of the season it was just the freshman in the middle,” Denny said. “After we started winning more and more games, everyone else started dancing. It became a superstition, like an every game type of thing.”

If their 28-2 final record is any indication, those pregame disco ball parties were just the trick. Although Denny said the tradition has been around long before this historic season and even before the seniors, this team grew increasingly superstitious as the season went on.

“I had my individual superstitions, which I still have now,” Denny said. “Putting on my knee pads right then left and my shoes right then left, but when I got here I gained more superstitions. It worked for me this year, so that means I have to do it the rest of the time I’m here.”

Denny and the volleyball team are not the only ones with an unchangeable pregame routine. Men’s basketball guard J.J. Avila only allows one song to flow through the speakers of his house on game days. It’s not your typical get-the-blood-flowing tune; it’s Johann Pachelbel’s “Canon D.” Otherwise known as the wedding march.

“I remember hearing it during nap time in kindergarten and I really liked it then,” Avila said. “I never really knew what it was until I figured it out in high school and started listening to it then.”

As it turns out, the song still makes him sleepy, so he plays it as he closes his eyes for a 15-minute game day nap. After that, he’ll shower and head to the court; it’s time to play.

“When it gets closer to game time, I’ll listen to more pump-up kind of stuff,” Avila said. “I’ll come out here and workout an hour and 45 (minutes) before tip-off, and I don’t really listen to music after that. I just think about the game.”

Averaging a team-high 17.3 points on top of 7.7 rebounds per game (second only to Daniel Bejarano’s 8.4), Avila proves that it is only weird if it doesn’t work, whatever “it” is. As far as Avila knows, he’s the only one on the team with a strange quirk to get in the right mindset for tip- off, but he doesn’t care. And as long as he is performing the way he has this season, his teammates wouldn’t fault him for listening to Justin Bieber.

“It’s just what I do,” he says. “Pregame is our time to ourselves, we just do our own thing before we have to come back and play together as one.”

Collegian Reporter Cali Rastrelli can be reached at sports@collegian.com or on Twitter @c_rasta5. Other strange habits:

Arrives 2 hours early; first on the court for pregame shoot-around

What she says about it:

“I’m not superstitious as much as habitual, but since we’ve been winning I tend to really do those same things. People always give me crap, but it gets you mentally ready to play.”

Always listens to the same song (“I Like the View” by ‘Lil Wayne) on the car ride to Moby, or directly before an away game.