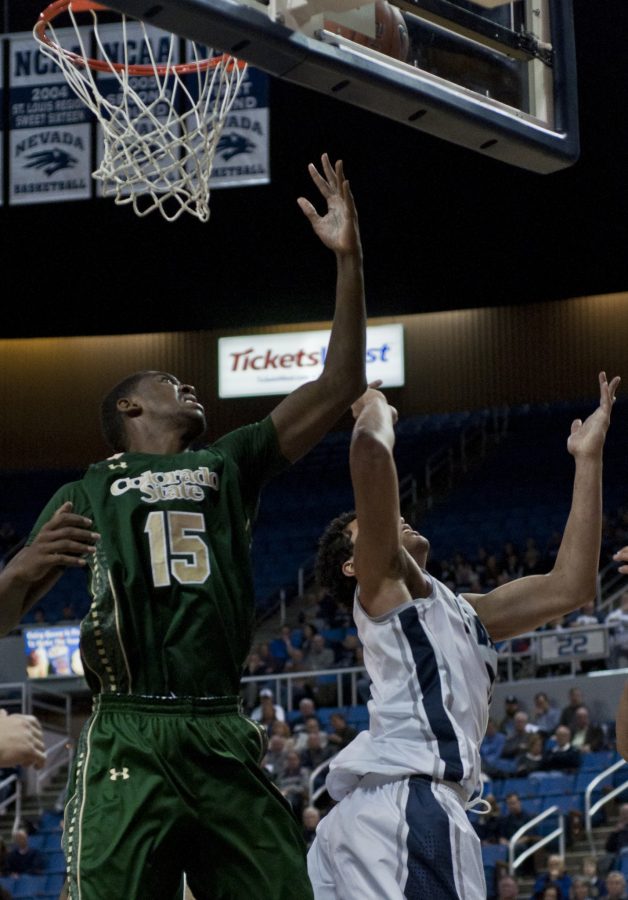 In a battle between two of the best guards in the Mountain West, it was Deonte Burton and the Nevada Wolfpack (11-10, 6-2 MW) who had the last word, beating Colorado State 76-67 Wednesday night at the Lawlor Events Center.

Despite 17 points and 10 rebounds from his counterpart Daniel Bejarano, Burton, along with AJ West, Cole Huff and Jerry Evans Jr. carried the Wolfpack to their sixth conference victory, combining for 58 of the team’s 76 points.

While the Rams (12-9, 3-5 MW) did a good job limiting the Wolfpack’s potent offense in the first half, turnovers were their Achilles heel, giving Nevada 10 points off seven giveaways and helping the host Wolfpack to a 33-28 halftime lead.

However, the second half didn’t fare much better for Colorado State as the Wolfpack found a rhythm early and used an 11-0 run midway through the half to open an 11-point lead with just over 13 minutes to play. From there, the Rams did everything they could to keep it close but Nevada used timely shooting to hold the Rams at bay, never letting them get closer than seven points.

“It just doesn’t work if every time we score, we let them come down and get an easy bucket,” Bejarano said. “We’re not going to win like that no matter who or where we play.”

One of the biggest struggles for Larry Eustachy’s young team was staying out of foul trouble, tallying twenty fouls in the second frame compared to just five in the first. There was frustration with the officiating from both teams, with Eustachy and Nevada coach David Carter simply looking at each other and shrugging their shoulders after consecutive missed calls by the officials late in the half.

“You know, I felt like we were playing good (defense) and then they end up calling a questionable foul but there’s nothing we can do about that,” Bejarano said. “It’s just frustrating when the game gets slowed down like that.”

Ultimately, it was the Rams’ poor shooting that did them in — shooting just 30 percent in the second half as well as missing 11 of their 14 3-point attempts. The trio of Avila, Bejarano and Jon Octeus combined for 50 of the Rams’ 67 points. However, they combined to shoot just 15-43 on the night.

“We just have a few guys trying to establish roles as scorers and they need to keep their confidence up,” Eustachy said after the game. “But I think we’ve started to rely on certain guys to score for us and it’s just a lot to ask of those three guys to carry our team.”

After losing two in a row, the Rams will travel to San Diego on Saturday to face Wooden Award semifinalist Xavier Thames and the No. 5 Aztecs. Saturday’s game tips off at 5 p.m. and will be broadcast on ESPNU as well over the radio on ESPN 105.5 FM.

Men’s Basketball Beat Reporter Keegan Pope can be reached at sports@collegian.com and on Twitter @kpoecollegian.