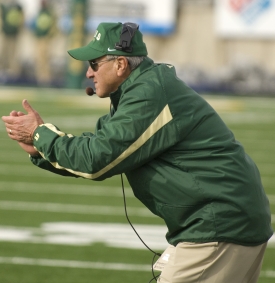 Joel Dreessen has a work ethic to rival Michael Jordan’s, he says it’s what got him into the National Football

League. But he credits a man he came across at Colorado State University for instilling in him the value of hard work.

Growing up in Fort Morgan, Dreessen worked tirelessly to earn his Division I scholarship, but after suting up in the green and gold under then head coach Sonny Lubick, he truly learned how to push his body to the limit.

“He taught me how to work hard; to wake up up early and go that extra mile,” Dreessen said.

But Lubick did more than improve Dreessen’s talent on the field; he taught his pla

yers to be good people. He carried the Rams to a 108-74 record in his 15-year tenure, boasting six conference titles and nine bowl appearances, the best decade the university has ever seen – but these are not the only reasons the field at Hughes stadium bears his name.

“My all-time favorite coach is Sonny Lubick, he was such a great leader of men in my opinion,” Dreessen said. “He taught me how to be a good person more than anything.”

Now the lessons Lubick imparted upon his players are relevant again for the first time since his 2007 departure,with coach Jim McElwain in his second year.

No player has been coached under both Lubick and McElwain, but those that have hung around the program have drawn parallels between the legend of Fort Collins and the newbie who quickly gained the support of the town.

No disprespect to Steve Fairchild, but it is not a coincidence that the Rams’ bowl bid drought ended under McElwain. Players thrive under the coaches like Lubick, McElwain and even the infamously rigid Nick Saban.

“Players like to be treated right, with dignity and respect,” Lubick said. He sees the similarities between his coaching style and what McElwain brought to the field. “I tried to treat them like sons, and push them as hard as I could for their own benefit.”

Dreessen also cited common ground between the coaches, though he has not been able to spend a lot of time around McElwain – he’s kind of busy being an NFL tight end. But just like anyone with a Twitter account, he’s heard the circulating rumors about certain Rams having the potential to play on Sundays.

And though Dreessen cherishes his time as a Ram and his memories of CSU, he realizes that there is a gargantuan leap between playing at a smaller D-I college program and suiting up for the NFL. But his advice to aspiring Rams is simple;

“It’s tough to say the least. That playbook in the NFL grows to the size of a dictionary,” he says. “Just keep doing the thing that got you the opportunity. For me, that was waking up early and lifting weights. I swear – that was the only reason I made that NY Jets team as a rookie.”

Now in his eighth year in the league, Dreessen has established himself as a reliable pair of hands for Broncos quarterback Peyton Manning to throw to, as well as a hard-working contributor on special teams.

While certainly proud of Dreessen’s tangible accomplishments, Lubick cares about more than the receptions and yardage. When asked about his favorite memory of his time at CSU, he did not mention a single victory, title or bowl bid.

“The relationships with the players I’ve worked with, to have Joel say nice things about me, not because he has to and seeing my players be successful,” he said. “Not just success in the NFL, but as fathers, what they are doing now, when they come back to town and they want to see me — nothing makes me happier.”

Football Beat Reporter Cali Rastrelli can be reached at sports@collegian.com or on Twitter @c_rasta5.