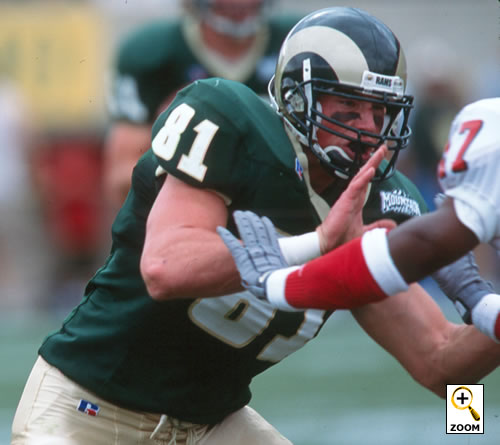 Forget Julius Thomas (no not really, we are thrilled he is back), today is all about the other tight end in Denver. Football Beat Reporters Cali Rastrelli and Katie O’Keefe talked to former Rams great, Joel Dreessen over the phone Friday afternoon.

With the Rams on the brink of a bowl appearance, here’s a special Q&A with Dreessen on where he sees the Rams going and how he feels about Gary Kubiak’s release from the Texans. Check back next week for a full feature on our favorite No. 81.

Q: What do you see from Kivon Cartwright and Crockett Gillmore?

JD: I really like those guys. I like how they play with great effort. Gillmore is a senior, so I was hoping he has one last game. More than likely, he will get an opportunity to show his value at the NFL scouting combine. And I really like Kivon as a young  player, he’s really athletic. Every time I turn on the TV, I think he’s catching a touchdown pass – I’m a little biased towards tight ends- but I really like watching those guys.

Q: You were coached under one of the most historic coaches in CSU history, Sonny Lubbick. Your thoughts on Jim McElwain?

JD: He’s very genuine and obviously loves what he does as far as leading men. I definitely think he has those guys playing a lot harder and certainly has the program working in the right direction.

Q: We all hold a special place in our hearts for Gary Kubiak, you spent some time with him as your coach – what can you say about his release from the Texans?

JD: It’s sad that he lost his job today, my heart goes out to him. He was a favorite of mine, he had a level of empathy for players that I had never had from a head coach. He appreciated the work you put in as a player, probably because he was a player himself – I definitely appreciated him as a head coach.

Q: The football program at CSU has experienced a lot of ups and downs over the years, where do you see the program now?

JD: It’s kind of been tough sledding, and that’s why I am so proud of this year’s group. They really took it upon themselves and bought into coach McElwain’s teachings, have a winning record and have a chance to go to a bowl game, so I’m just really proud of them.

Football Beat Reporter Cali Rastrelli can be reached at sports@collegian.com or on Twitter @c_rasta5.