Q & A: Quick turn around has Hilbert addressing the upcoming matches 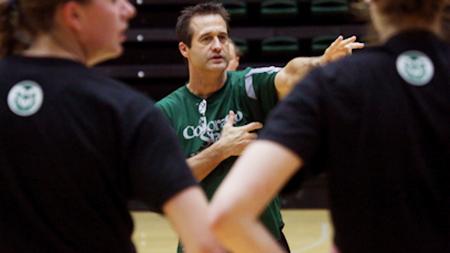 Head coach Tom Hilbert explains a drill during practice arlier this week. The Rams have a triple header this weekend starting tonight against Virginia and continuing Saturday against Denver and Rhode Island.

Q: What has the tape shown you about Cal State Northridge?

A: Well they are a good blocking team, they have a great setter who attacks a lot of balls. They have a great one foot take off hitter and then other than that they are similar to us in that they make very few mistakes and they put a focus on scheming and stopping people.

Q: How do you take what you see on the tape and put that into drills and plays during the two days of practice?

Q: With the first focus towards CS Northridge and then the possibility of USC or New Hampshire on Friday, what does it take to get past the first round?

We have to go through them at their home venue so it is not easy to do. How do you move on, you win your first one and get yourself ready.

Q: Are you similar to the teams you will be competing against?

Deedra (Foss) assists-wise is one of the top in our area and our region of the country. Our error percentages for example are as low as anybody’s but we have not faced giant blocks. And that is going to be the big difference, that is going to be when we know how good we are.

Q: Where do you see this team going in the postseason?

A: I just want to go and play the way we have played, that is all. Where does that take us I do not really know.

I think again we are kind of an unknown commoditiy even to ourselves. We do not know how good we are against a team like UCS, we just don’t know because we have not played a team that athletic is year.

I want to find out. I want to get into that match and find out where we stand.

Volleyball beat reporter Haleigh Hamblin can be reached at sports@colleigan.com