How does CSU stack up in the NCAA 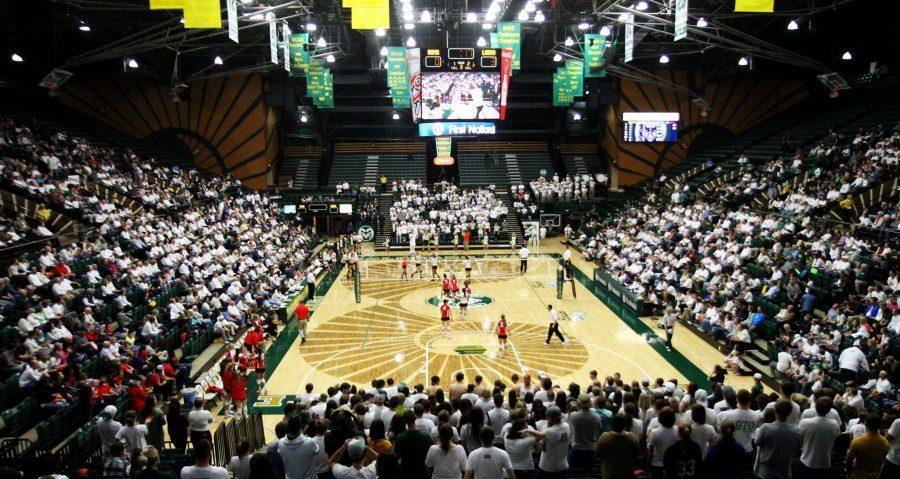 CSU Fans pack the house for a "white out" during the Ram win against the New Mexico Lobos Thursday at Moby.

After fans, players and coaches sat on the edges of their chairs during Sunday night’s selection process, the time came to prepare for what many would say is the most important game of the season.

The 2013 NCAA tournament bracket was released and places Colorado State was into the Los Angeles lower bracket. Scheduled to compete against No.6 USC or New Hampshire on Friday, the Rams have a two day turn around before they take on Cal State Northridge Thursday.

“Once they seed the top sixteen it just goes by region and geography and clusters. It is one of the  more difficult ones for the two in the pod,” head coach Tom Hilbert said. “It is one of the most difficult twos in the whole country, so we will need to play our best at all times.”

For a majority of the 2013 season, CSU has been a ranked team. Although the Rams have been taken away from the rankings, it provides a clean slate to prepares to target the weaknesses of Cal State Northridge.

In order to respond well to the challenge, CSU will tighten its fundamentals on defense and blocking. With two practices before the Rams travel to USC, time is cut short on the most important turn around of the season.

“Were kind of an unknown commodity even to ourselves,” Hilbert said. “We don’t know how good we are against a team like USC because we have not played a team that athletic this year. But I wanna find out.”

To be successful against No.6 USC, New Hampshire and CS Northridge, the Rams will need to block the offensive attack and get their hands on the ball in the back row. CSU has been successful this season at limiting errors and forcing opponents to play in uncomfortable situations.

It is not time to count CSU out of moving on to the next round or even placing into the sweet sixteen. The Rams offense and defense have proved to withstand competition of all standards.

If the Rams come out and play their best volleyball, CSU has a strong change to move on to play and defeat the winner of USC/New Hampshire.

“I think we will do well and it will be great competition for us and I am excited to see how we respond to the challenge,” Samantha Peters said. “I think we stack up pretty well to these opposing teams.”

Ranks are one thing but performance in the actual game will prove to be the victor.

Volleyball beat reporter Haleigh Hamblin can be reached at sports@collegian.com

While No.6 USC is the top ranked team in the Los Angeles regional bracket, it does not earn the best statistics of the bunch. While each team earned above a .200 hitting percentage, the Trojans are about even with the Rams.

USC will play on its home court as it takes on two opponents this weekend. The Trojans players are a physical team that work quickly to get arms up for the block and dig balls.

Statistically and by rank, USC will be the toughest competition of the four teams.

New Hampshire is currently on a nine game winning streak headed into the first round of the NCAA tournament. Scheduled to play UCS on Thursday, the Wildcats are expected to struggle on the road with a 7-5 record.

The Wildcats are 12-1 on their home court, though their season did not compile any ranked teams. New Hampshire has the lowest statistics out of all the teams in the lower bracket.

Cal State Northridge received its first share of the Big West title, finishing 13-3 along with UC Santa Barbara and Hawaii. CSU has played four opponents that the Matadors had this season, though the Rams finished 5-1 against those opponents compared to their 3-2 record.

With similar play to CSU in terms of offensive attack and blocking percentages, it will be key for the Rams to bring a physical game in order to be successful against this Big West team.

Colorado State has proven itself this season to be a team with the capacity of a late set comeback. With several games this season going to the fifth set, a red zone battle will be expected from the Rams.

CSU is 3-0 in the Los Angeles area as it previously won the Pepperdine Invitational in the second weekend of play. The Rams have a versatile offense that has proved to work in its advantage as it earns the highest hitting percentage of any team in the bracket.