Dri Culbert: What it takes to be an NCAA volleyball player 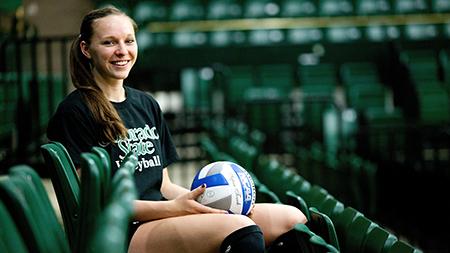 CSU volleyball player Dri Culbert brings a level of passion and commitment to studying the game uncharacteristic for a freshman. Culbert will start against No. 2 UCLA on Saturday at 7 p.m at Moby Arena.

While competing on the NCAA level has its advantages, getting to play against one of the top ranked teams in the country comes with sacrifice and long hours in the gym.

Often forgotten that our favorite players on the court are first and foremost college students like the rest of us, its daily life style is anything but typical.

Becoming an NCAA athlete is no walk in the park. It takes determination, perseverance and dedication to reaching the goal of the big leagues. As a sophomore for the Rams, outside hitter Adrianna Culbert has been a key role on the court during the 2013 season.

“To be successful you just have to be on treatment because your body will ware down,” Culbert said. “You have to keep pushing through to compete on this level.”

As a powerhouse in the back row and on the net, her ability to swing and kill the ball and dive across the court to dig balls while maintaining a consistent endurance for a little as three sets to as many as five, she would not be able to do this without years of training.

Instead of heating up top ramen in your microwave or making a quick drive through run at the local McDonalds for a Big Mac, Culbert monitors her intake to be in tip top shape for every serve, set and match.

“You just have to make sure you eat really healthy, nutrition is a big key,” Culbert said. “Like no fast food definitely no bad foods for you and getting a lot of sleep because at the end of each day your body is exhausted. With such a long season you have to make sure you are always ready for the next day.”

Culbert’s week consists of hitting the gym, consistent attacks in practice and lifting twice a week while still finds time to load up on carbs, fruits and vegetables.

All of this was made possible by those extra crunches, pushing herself to another repetition of lifts and running that extra mile. Culbert is one of the hundreds of NCAA athletes that puts its body before any thing else.

“When you compete at a high level in the NCAA, it is expected that opponents will be bigger, faster  and strong than people we play against in our conference,” Head Coach Tom Hilbert said. “You need to be in shape to compete a the highest level possible.”