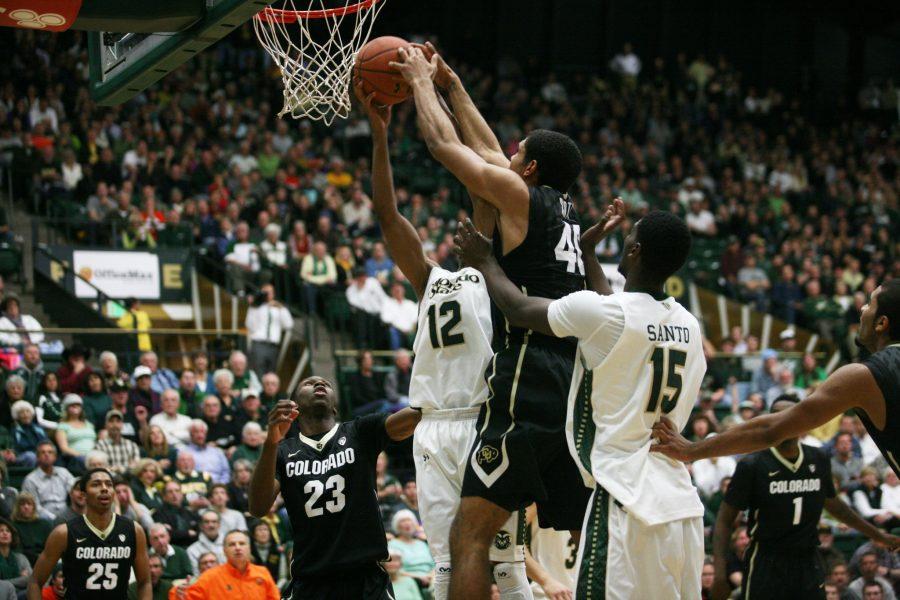 After calling CSU “little brother” last year, the CU star guard backed it up with a big game as the Buffs won in Boulder. This year he refrained from opening his mouth before the teams faced off, but he didn’t hold back on the floor while leading CU with a game-high 28 points as the Buffs pulled out a 67-62 nailbiter in front of 8,268 fans at Moby Arena Tuesday night.

Despite not scoring a single basket until the 7:26 mark of the first half, the outspoken junior from Los Angeles turned it on in the second half, scoring 19 of his 28 in the second frame. Following the game, CSU head coach Larry Eustachy praised Dinwiddie’s performance and ability to back up his talk.

“He likes to talk, but he really backed it up and I admire him for that,” Eustachy said. “He dominated the game at the end and controlled the whole pace of it — we had no answer for him.”

In a first half marred by poor shooting and fouls, CSU (6-3) held its own against a deeper, more talented CU (8-1) team and even held a 34-30 lead at halftime while shooting just 35-percent from the field.

Despite an abysmal 9 of 40 shooting performance from juniors JJ Avila, Jon Octeus and Daniel Bejarano, the Rams led at multiple points until Dinwiddie’s layup with 2:57 left in the game that put the Buffs up for good. After being the leading scorers in seven of CSU’s first eight games, the trio struggled to find their rhythm, often forcing up off-balance shots over CU’s long zone defense.

“We just startled settling a little bit when our shots weren’t falling,” Bejarano said. “Myself, Jon, and JJ; we shot horribly. Those shots weren’t going down but I felt like we had enough scoring to win, but we needed to buckle down on defense and we didn’t do that. The tougher team won, that’s all there is to it.”

Even with the halftime lead, Eustachy implored his team to keep the same level of intensity in the second half, but the stage and the opponent were a little too much for the Rams. After shooting just 36 percent in the first half, the Buffs started the half with a 12-6 run to take the lead at 15:05. From there, the lead shifted eight times until Dinwiddie’s go-ahead basket.

After Dinwiddie converted the final two of his 11 made free throws with 13 seconds left, CSU got a chance to tie it. However Avila’s fade-away three-pointer didn’t even draw iron as Askia Booker rebounded the ball and closed it out with two free throws in the final seconds.

Although his young team battled and scrapped with the nationally-ranked Buffs, Eustachy was visibly disappointed in the postgame press conference.

“I thought the tougher team won tonight. We couldn’t take what we talked about at halftime in the second half. We needed to stop them in transition and make them play in the half-court, and I think they got four or five easy transition baskets to start the second half,” Eustachy said.

Regardless of the loss, players and coaches remained positive about the direction this young team is headed in.

“I know how big this game is to our fans and I apologize that we couldn’t pull this one off. None of these guys have been asked to be the main cog in this kind of game. There’s no one on this team that has been more than a role player in this rivalry,” Eustachy said. “We’ll learn from this and we’ll move on.”

Men’s Basketball Beat Reporter Keegan Pope can be reached at sports@collegian.com and on Twitter @kpopecollegian.