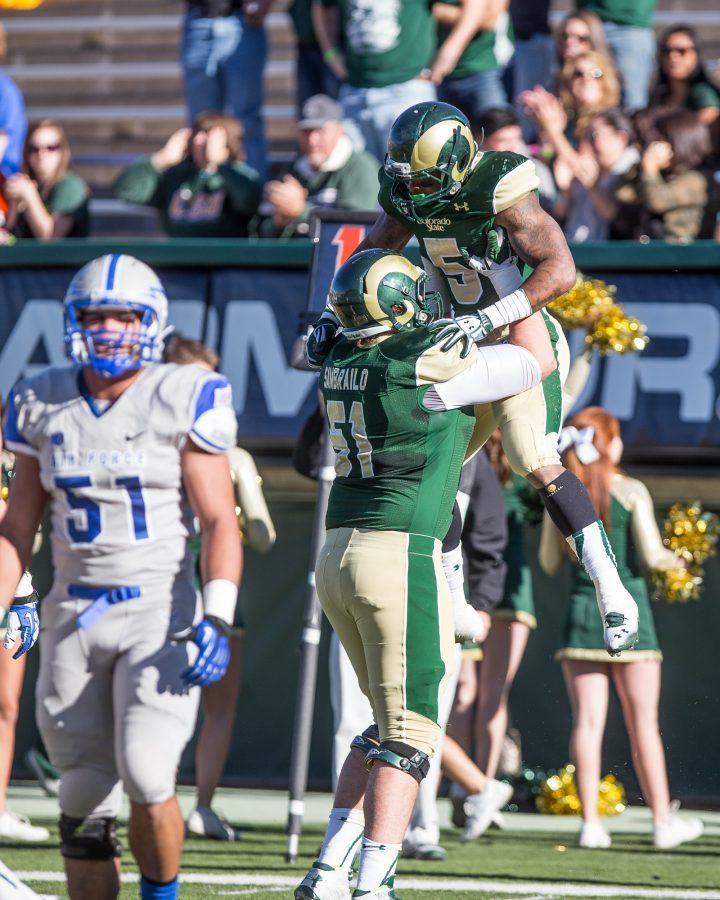 The streak is over.

CSU’s seven year losing streak to Mountain West rival Air Force ended Saturday as the Rams trounced the Falcons in a 58-13 blowout win to bring the Ram-Falcon Trophy back to Fort Collins for the first time since 2005.

“The way we sent these seniors out and the way we atoned for seven years of butt-whopping against these guys, I’m just really proud of our guys,” McElwain said. “The fashion in which we did it, we were physical, we played relentless; the way Ram football is going to be played around here for a long, long time to come.”

One week after holding Mountain Division leader Utah State to their lowest point total of the season, the CSU defense transferred that same energy into Saturday’s game as they held the Falcons scoreless until just 5:02 remained in the game.

For the fourth time this season the Rams scored more than 50 points on their way to becoming bowl eligible for the first time since 2008.

Despite last week’s strong defensive performance against Utah State, the Rams were held scoreless as the Aggies won 13-0, making Saturday’s game a must-win for the Rams to have any chance of playing in the postseason. Unfortunately for the Falcons, who have had a tough season winning just two games, they were on the receiving end of the Rams’ frustration after being shut-out last week.

Quarterback Garrett Grayson, who many Ram fans questioned after the first four games of the season in which the Rams lost to CU-Boulder, Tulsa, and Alabama during the stretch, showed why McElwain never gave up on the junior quarterback from Washington. He finished the game with 395 yards—just two yards shy of tying his career best— en route to breaking a 30-year-old CSU record for single-season passing yards set by Terry Nugent in 1983.

“He’s done a heck of a job, not only with his plays but also with this leadership,” said center Weston Richburg. “The guy is a leader, and when your quarterback is a leader guys are going to follow him. It’s been really awesome to see him develop and mature.”

Perhaps a little trickery was set-up before the game even began when McElwain told reporters Monday before the game that Bibbs would likely sit out the final regular season game with a lower body injury he sustained the week prior against Utah State.

While McElwain said the Rams intended to use Bibbs as more of a decoy in the play-action game, Bibbs didn’t miss a beat as he scored three touchdowns for an FBS record seventh time this season and added to an already impressive 2013 campaign with 79 yards, bringing his season total to 1,572 yards. This season marks the first time in CSU history that a running back has rushed for more than 1,500 yards at the same time the quarterback has passed for more than 3,000 yards.

Now the Rams (7-6, 5-3 MW) will await a possible bowl invitation that is expected to be announced within the next week. For a squad that began the season with dreams of playing in the postseason, not receiving a bowl bid would be crushing for the current roster that has never experienced a winning season at CSU until this year.

“It would be very disappointing,” Grayson said. “I think the seniors deserve a bowl game but I think we’ve put up a pretty strong case that we should make it.”