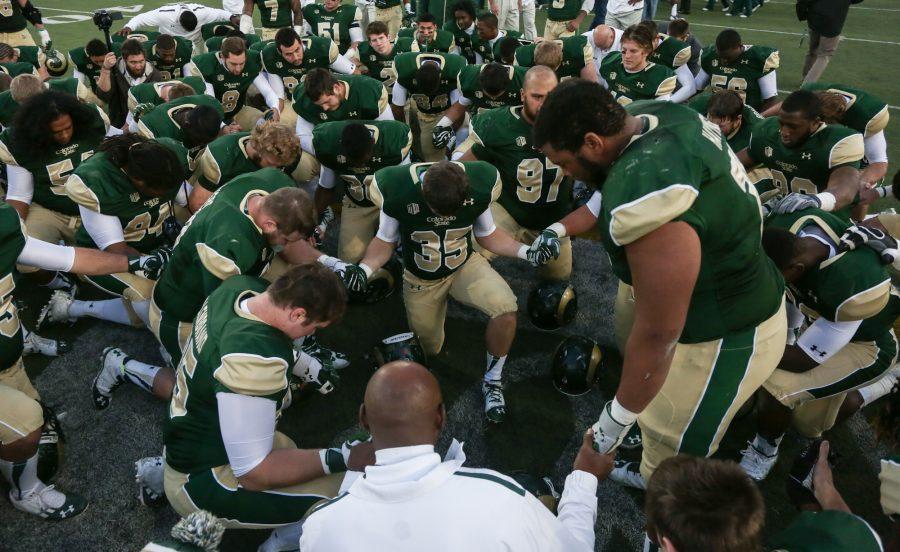 This week, football beat reporters Cali Rastrelli and Katie O’Keefe have been studying CSU football’s upcoming game at New Mexico. Check out the advantages each team has on the other, and their final predictions. Make your own prediction on Twitter using #fivepointspinky. We’ll give a shout out to the closest prediction after the game.

[Katie O’Keefe] Stopping the run. While New Mexico ranks second nationally in rush offense, the Rams have had a good amount of success stopping the run this season. They gave up only 66 yards rushing to No. 1 Alabama and contained Wyoming quarterback Brett Smith to 12 yards rushing after having gained 420 yards through six previous games. It’s true that in the past Rams have had a difficult time stopping triple-option offenses, they gave up 459 yards rushing last season to Air Force, but New Mexico has been more one-dimensional lately and quarterback Cole Gautsche attempted only three passes last week and completed one. If the Rams can stop Gautsche and running back Kasey Carrier from running all over them, they have a shot to win on Saturday.

[KO] Motivation. The Rams have a shot to make it to a bowl game for the first time since 2008. They need to win at least two of their remaining three games in order to do so, which should give them plenty of motivation to beat New Mexico before going on the road to take on Utah State (6-4).

[KO] Offensive line strength. CSU has a veteran offensive line anchored by center Weston Richburg. They have been able to provide big holes for running back Kapri Bibbs who racked up 312 yards and four touchdowns last week against Nevada; New Mexico is giving up an average of 253.3 yards rushing per game.

[Cali Rastrelli] Momentum. Both teams are coming off of a win (New Mexico 45-Air Force 37), the Lobos have yet to win back-to-back games. The Rams were in a similar boat until they took two in a row from Wyoming and Hawaii. Now that they have done if before, they know they can do it again.

[CR] The weather. We complain about Colorado’s bi-polar weather conditions, but it preps the football team to play in anything. The past two weeks of practice, the players experienced mists, the frigid cold temperatures and the irritating gusts of extreme wind. Saturday in Albuquerque is predicted to be 63 degrees and sunny. If the Rams can perform in Colorado extremes, they will excell in the perfect conditions.

[KO] Triple-option attack. New Mexico ranks No. 2 in the NCAA in rush yards per game with 328.9. While CSU has improved their rush defense this season, with a team that runs as much as New Mexico does, the Rams could fall prey to an explosive pass play. “Those are the plays that are created when you’re up there sniffing out that run the whole time,” McElwain said of the Lobos’ option offense. “All of a sudden here goes this guy wide open down the middle of the field.”

[KO] Senior night in Albuquerque. Saturday will be the last time 18 New Mexico Lobos seniors get the chance to play in front of their home crowd. While it has been a difficult season for New Mexico and second-year head coach Bob Davie, the team is improving and will no doubt want to send the seniors out on a high note, which could provide extra motivation for a win.

[CR] Explosive offense. One of Mac’s favorite lines to spew is the danger of explosive plays. The Lobos are averaging 34 points per game, good enough to get the the fourth slot in the Mountain West. When McElwain has a hunch, he’s not often wrong. The Rams defense will have to be on their toes.

[CR] Pass defense. CSU is ranked at the bottom of the MW, allowing opponents an average of 303.3 passing yards per game. UNM is a stinger No. 2, giving up 223.7 on average, plus junior DE Brett Bowers is averaging .7 sacks per game — look our Garrett.

[CR] If any running back in the MW can compare to Kapri Bibbs, it’s Kasey Carrier. He is averaging 123.3 rush yards per game, the No. 1 to Bibbs’ 2 in the conference. Between Carrier and his dynamic partner, receiver Carlos Wiggins who averages 130 all-purpose ypg, CSU’s defense will have their hands full.

When it comes down to it…