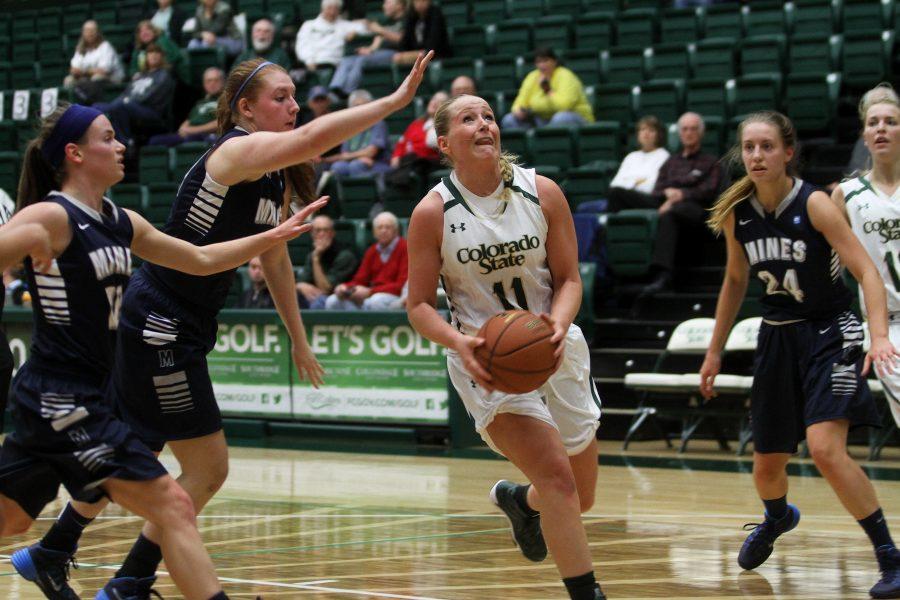 The Rams win over Mines 95-47 during a Women's Basketball exhibition held at Moby Monday night. The Rams look forward to a promising season.

If you were to speak to Ellen Nystrom and Elin Gustavsson a year ago, they probably wouldn’t have believed you if you told them they would be starters for a Division I college basketball team located 5,000 miles away from home.

Nystrom and Gustavsson played both as teammates and rivals in Sweden during their high school careers. They played on opposing high school teams, but played together on their nationals team where the journey to Fort Collins began.

“I had five schools recruiting me and I picked CSU because the coaches actually took the time to come out and watch me play. It was a great opportunity and I wanted to try it out,” Gustavsson said.

As soon as Gustavsson saw the opportunity presented, she wasted no time recruiting her friend and teammate into the process as well.

“Ellie just called me one day and was like ‘Ellen, please come play with us!’,” Nystrom said.

Gustavsson and Nystrom are two of seven girls on this year’s roster that have traveled from Sweden, Denmark, Belgium and Norway to be apart of this rebuilding process.

When head coach Ryun Williams took the position in 2012, he saw that he had to turn the program around and he had to do it quickly.

Williams and his team of assistant coaches knew they had to get better recruits at CSU, but recruiting kids from in-state is a lengthy process that they didn’t initially have time to do.

“To really increase your talent pool quickly, we thought the international route is always a good part of the formula for turning a program around,” Williams said. “It’s not the only part of the formula, but it can be a small piece, and it just so happened that for us the pieces just started to grow.”

Assistant coach Tim Moser spent all of the 2012-2013 season looking for the best athletes to recruit and came back with half of CSU’s current team.

From the perspective of the athletes who were recruited, the experience in Fort Collins has been a welcoming one that is full of potential opportunities.

“Being here is like an adventure,” Gustavsson said. “Everybody has been so welcoming and I think that’s a very American thing to be so nice. I’m excited to travel with the team. I’m just excited for everything.”

Junior Gritt Ryder is another member of the team that has traveled great lengths from her home country of Denmark to get the opportunity to play Division I basketball. Spending her last two years in Anchorage and Western Nebraska, she took the opportunity to follow Moser to the new-look Rams.

Since Ryder is two years further along in the transition from European to American culture, she is someone the younger girls on the team can look up to.

“I would say that I’ve had the opportunity to act as kind of a mentor for these girls,” Ryder said. “Having (us) coming from foreign countries, I’ve tried to be there for them and I’ve talked a lot about missing their family and telling them what to expect with classes and coaches and how the American team is different from home.”

As far as what the future of European recruitment looks like for CSU, Williams has indicated that it will most likely continue to be a part of their formula for building a team.

“We’re always just going to try and get as good of a player as we can from wherever,” he said. “If they happen to be from Littleton, Colorado we’ll surely take them, but we’re established in our recruiting over there now. If there happens to be another Ellen, then we’ll absolutely go over there and try to get them.”