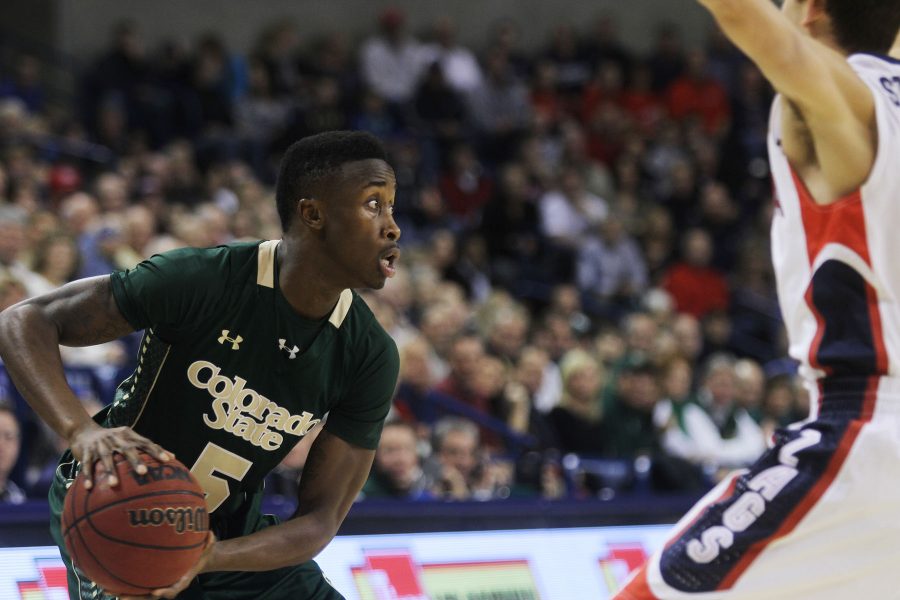 SPOKANE, Wash. — Only eight teams have walked out of The Kennel in Spokane, Washington as victors against the Gonzaga Bulldogs. CSU tried to become ninth on the list Monday night, but failed as it suffered a defeat of 93-61.

“Obviously we were no match for Gonzaga, they’re a top-15 team for a reason,” head coach Larry Eustachy said. “They manhandled us.”

The pressure that was placed on the Rams going into Monday night’s game against No. 15 ranked Gonzaga was apparent from tipoff and continued until the Rams ultimately were taken care of by Gonzaga on the road; an environment that has proven to be lethal to anyone who enters.

From the moment the Bulldogs walked on the court, the sold-out 6,000 capacity arena never took a moment to take a breath from the constant cheering, yelling, chanting and stomping. The ground in Spokane was shaking from the student body which acts a sixth man for the Gonzaga basketball team.

Pitted against a team who is 121-8 on their home court since 2004 and competing with one of the most passionate crowds in the country were just a few of the many challenges the Rams faced on Monday night.

The Rams offense never got itself going throughout the entire 40 minutes of regulation, ending the night 32 percent from the field and 29 percent from three-point range.

One player who had offensive rhythm on Monday was starting guard Jon Octeus.

“Jon was helping us out there for a while and he was doing his thing and that wasn’t enough. He didn’t get much help,” guard Daniel Bejarano said.

Octeus had 27 of the Rams 61 points on the night and he nearly managed to outscore all of his teammates combined.

“I just knew that my team needed a spark,” Octeus said.

However, while the Rams were constantly battling a barrier of getting into their rhythm, the Bulldogs were getting looks around the perimeter on virtually every possession they had and were able to hit the majority of them.

Every single player on the Bulldogs roster, with the exception of one, put points on the board in their matchup against CSU. The one player who didn’t score was recovering from oral surgery and did not play.

The Bulldogs were unstoppable from the perimeter, one of the many weaknesses CSU’s defense has consistently shown in their handful of exhibition and regular season games. In addition to shooting 57-percent from the field, they shot a solid 45 percent from three-point range.

Gonzaga ended the night with 14 shots from behind the arch, eight of them coming from junior guard Gary Bell.

At the end of the night, the Rams just looked frustrated; not with their teammates but with themselves. The team is in complete rebuilding mode and is trying to replace an entire starting lineup that gave the Rams a run in the NCAA tournament last season.

“What surprised us are the things that we do best are the things we lacked in the most, which is rebounding, getting at loose balls playing hard defensively,” Octeus said. “We gave up 90, almost 100 points tonight so we just need to focus on what we do best and I think everything else will take care of itself. “

CSU faced an electric environment in Spokane. The combination of Gonzaga’s student section, the hype of a nationally televised game and squaring off with a top-20 team ultimately proved to be too much.

“It’s sad and embarrassing and we can’t keep it in our head,” said Bejarano. “We just have to move on.”

The CSU Rams could not defend Gonzaga beyond the arc. The Bulldogs shot 7-12 in the first half of their game in the ESPN-U 24-Hour hoops marathon.

The opening half of the CSU vs. Gonzaga game was nothing but an offensive showcase for the Bulldogs. While everything seemed to be falling in for them, nothing was going in for the Rams. This instantaneous offensive rhythm that the Zags got off to put them up 47-26 at the half.

Bell, Coleman, Pangos and Stockton had a solid first half shooting from the perimeter for the bulldogs while the Rams primary shooters Bejarano and Cohn both only managed to put up three points in the first half.

Jon Octeus is the only player for the Rams who seems to be able to get anything done on the offensive end, being 4-7 from the field and 5-6 from the three point line.

The Rams have looked nothing but frustrated from tipoff and need to get offensive momentum going in their direction in order for them to turn this one around.

Basketball Beat Reporter Hannah Cornish can be reached at sports@collegian.com and on Twitter @hmcornish.

Britta Peole compared it to the Hunger Games.

The Gonzaga freshmen anxiously awaited the tweet that would reveal where she needed to sprint to get the “highest number possible” for this momentous occasion in the life of a Bulldogs basketball fan.

At 12:15 p.m.on Sunday the Gonzaga athletic program tweeted the secret locations for the ticket pick up of “Tent City”, a Gonzaga basketball tradition that consists of camping to get one of the first spots in line for entry into McCarthy Athletic Center widely referred to as “The Kennel.”

Accordingly, the Gonzaga student body ran like their lives depended on it to the nearest ticket location.

“Someone tweeted that watching people run for numbers for tent city is like watching the tributes for the Hunger Games run to Cornucopia,” Peole said. “Theres people all around campus that just stand and watch. It’s like a mad dash of 500 people.”

Britta was one of the few that happened to be in the right spot at the right time, landing tent number four in Tent City. Considering this is Peole’s first time participating in this tradition, landing number four out of 90 tents is something to be proud of.

“This is my first Tent City and the fact that we got number four was totally crazy,” Peole said.

Looking through the sea of tents was comparable to looking out at a tailgate for an SEC football game. People bring their sleeping bags and cook out gear and spend the night in the 35 degree weather, all for the sake of their revered and beloved basketball program.

These ticket numbers are so highly regarded that people go to the lengths of sending dummies and setting up booby traps to throw people off the scent or the true ticket locations.

“Some people will send dummies and have people running to the fourth floor of college hall, which has really steep steps, so people will follow them in there when the actual location is on the other side of campus,” freshman Emily Carcher said.

Some of these decoys worked quite effectively, leaving Carcher and her friends stuck with tent No. 80.

Even though some people might perceive this type of fan dedication to be a bit overzealous, these students participate in this madness because of the experience that comes along with it.

Basketball Beat Reporter Hannah Cornish can be reached at sports@collegian.com and on Twitter @hmcornish.