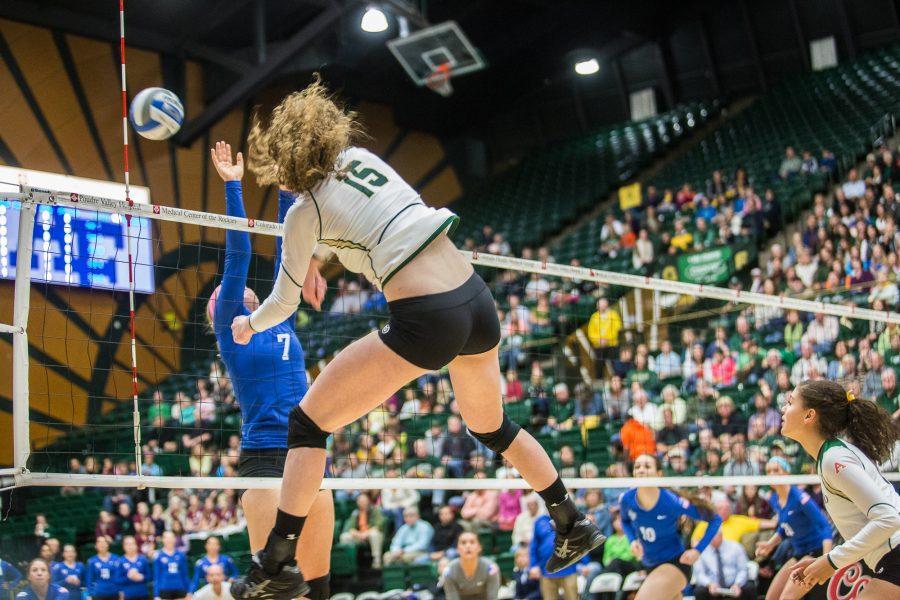 The unimpressive record and struggling last appearance against the Rams proved improvement can occur over a few week span. When Air Force took the court with just three wins to its name in the Mountain West Conference and five overall, it did not warn CSU to anticipate a close battle in every set.

The Falcons came out making the Rams sweat from point one to match point. In Friday night’s match, CSU found itself trailing the Falcons more often than extending a lead. By as much as a 7-1 deficit in set two, the Rams pulled through late in each set to sweep the Falcons (25-21, 25-20, 25-21).

“They kept it very competitive, and I felt like we were not as good at disruption and scoring serving points,” head coach Tom  Hilbert said. “We did have seven aces, which is good but they seemed to pass well. It was a very interesting match, you know each game was competitive until about 18 points and then we started to pull away.”

Putting together late-set rallies is what No. 10 Colorado State has been good at doing all season.

While CSU found itself battling point for point, Friday became a battle of which team would block the attack or would be able to dig the balls that surpassed the block. As arms flung to the air reached to get a touch on the ball, the defense prepared to lunge across the court on cross-court kills.

The player who got her hands on a majority of those kills was sophomore libero Jaime Colaizzi. With every touch getting the ball up for a preparing spike, she held the defense with 23 digs on the night, her sixth game of the season with 20-plus digs.

“It is just about getting into a groove and adapting to each hitter,” Colaizzi said. “Because I think the hitters tonight had a tendency to hit some sharp cross balls and they would go deep corner.”

One reason Colaizzi had so many digs came from the Air Force offense continually setting outside hitter Akokwe Clement. On 40 attempts, Clement had 12 kills hitting .175 percent. While that may seem low, she was the go-to player for the Falcons as almost every set went to the left side.

While CSU struggled early on the block, Hilbert could not figure out if the difficulty was the Rams’ slow reaction to get its arms up or if Air Force was hitting well against the Rams. When the time came late into each set, the blocks began to go in CSU’s favor and Air Force began to make mistakes, giving points to the Rams.

When key plays needed to happen, it was CSU which made it happen. A well-rounded victory for CSU came off 117 total attacks on the offense, 51 kills, 12 blocks, 50 digs and seven aces; all six zones had a contribution in Friday’s win.

The victory over Air Force tied the MW record of 25-straight wins set by Utah in 2006. A close battle in every set allowed the Rams to clinch a share of the conference title, CSU’s fifth-consecutive championship.

Volleyball beat reporter Haleigh Hamblin can be reached at sports@collegian.com