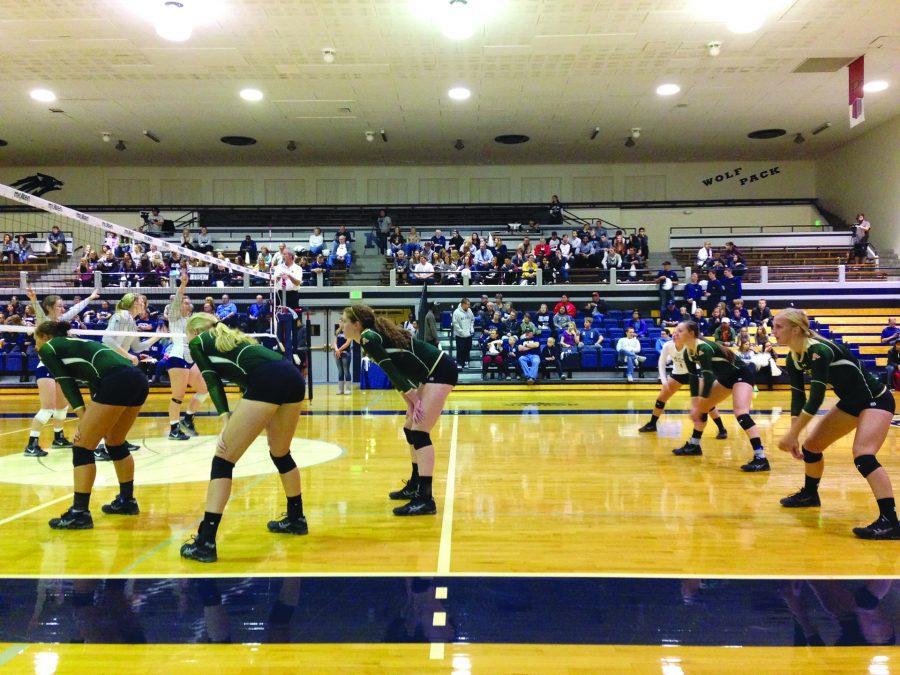 After what started to be a struggling first frame for CSU, it didn’t take long for the momentum to change in its favor.

During Thursday night’s match against New Mexico, the Rams revealed a not so characteristic start. A first set loss deficit by nine points initiated a momentum change for CSU as the wheels began to turn into point after point for the Rams. Kills began to rack up as CSU hit the attack over the block, forcing the Lobos to make mistakes in their four-set victory (16-25, 25-20, 25-19, 25-19).

“Set one was very uncharacteristic of us,” head coach Tom Hilbert said. “This was a gutsy game by our team and you know we were tight at first and then people got relaxed and into a flow. We won and I’m proud of the players.”

While the roar of the crowd continued in set one despite a struggling appearance on the court, hope of a remaining an undefeated record did not dispare in Moby. Serve after serve, the Lobos silenced the Rams with a .000 hitting percentage on 44 total attacks.

The leading reason UNM held CSU to such a low hitting percentage and high attacker error, 10 in the first set alone, came from the hands of Chantale Riddle, Lexi Ross and Skye Gullatt. With a combined total of 17 blocks on the night and 22 as a team, the Lobos scouted the Rams and knew where to be when the set went up.

What opposing teams struggle with against CSU is its ability to set multiple players and avoid the block. Headed into set two, Marlee Reynolds and Michelle Lawrence, who struggled against the UNM block, tweaked their approach in order to hit over the block for kills.

“I just try not to lose composure, to just stay constant in my mind set which obviously means I need to pick up my game,” Lawrence said. “Just staying calm and relaxed and then on top of it my other teammates encourage me that I will be okay helps a lot.”

An asset CSU has possessed from the start of the season has been the middle blockers ability to get up and kill the ball on quicks. Samantha Peters and Kelsey Snider took the Lobos in their hands and punished the defense late into the match.

With the sets played off the hands of Deedra Foss, the offense got into motion and were able to connect the kill to the opposing side of the net. Hitting .206 in set two, .205 in set three and .364 in set four, CSU silenced the Lobos and ran towards a victory.

The toughest set on the night for the Rams came in the third. Tied at 11 before CSU went on a two-point run, the Rams and Lobos had six ties. After the mid-point into the set, UNM was not able to over come the lead as it fell to 2-1 sets against CSU.

“The third set was the most competitive of all of them,” Hilbert said. “We gutted and grinnded through it and we won. That New Mexico team is talented and they have a great future ahead of them; we knew it was going to be a battle.”

Volleyball beat reporter Haleigh Hamblin can be reached at sports@collegian.com.