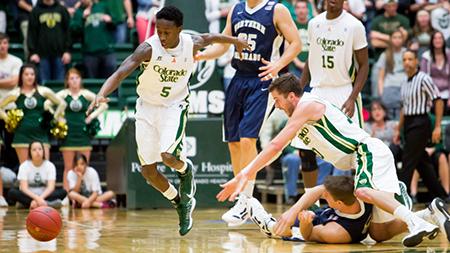 Point Guard: Jon Octeus 6-4/170—The junior from Miami, Fla. likely has the biggest shoes to fill of anyone this year, replacing Dorian Green as the Rams’ floor leader. With the loss of Jesse Carr to an ACL injury, Octeus, along with freshman David Cohn will be counted on to heavily as the lead guards in Larry Eustachy’s up-tempo offense.

Shooting Guard: Daniel Bejarano 6-4/202—After a 2012-13 season where he was named the Mountain West Sixth Man of the Year, the junior from Phoenix will be looked to as one of the Rams go-to scoring options at the two-guard. Expect his rebounding numbers to decrease from a year ago as he moves from his natural spot at the small forward into the shooting guard role.

Small Forward: Joe De Ciman 6-4/185- Rarely used last year, De Ciman will have to play quality minutes for a team with only nine healthy scholarship players. At 6’5″, he will be counted on to play both the ‘2’ and ‘3’ positions while providing consistent outside shooting on a team lacking in that area. Played this summer with the Canadian National Team in the FIBA Under-19 World Championships.

Power Forward: JJ Avila 6-7/246—Avila will be counted on early and often as one of CSU’s top scoring options along with Octeus and Bejarano. After spending last season away from basketball following two years at Navy, the redshirt junior from McAllen, Texas will be expected to play big minutes as the Rams’ only true power forward.

Center: Gerson Santo 6-9/238—Filling likely the second-biggest hole left by last year’s team is Santo, a senior from Brazil. After playing behind All-American Colton Iverson last year, Santo will team with JuCo transfer Marcus Holt to fortify a long defensive frontcourt. He and Holt will have to step up big defensively for CSU to contain some of the country’s best big men when CSU faces Colorado (Josh Scott), New Mexico (Alex Kirk), and UNLV (Khem Birch).

Guard: David Cohn 6-2/170—Heralded guard from the Chicago area will be looked to as a scoring option off the bench. Cohn has the ability to play both guard positions, but will have to step up defensively playing against some of the better backcourts in the country this year.

Guard/Forward: Dwight Smith 6-4/185— Early in his career Smith was known for his superb perimeter defense, something he will have to bring back this year with the team’s in-your-face defensive style. Has spent plenty of time in Eustachy’s doghouse recently and will have to work to regain his starting role.

Forward/Center: Marcus Holt 6-10/200— JuCo transfer will challenge Santo throughout the year for playing time and the starting center spot. Holt is an exceptional athlete, but will have to play tough in the post against opposing centers who will likely outweigh him by twenty to forty pounds on any given night.

Guard: Carlton Hurst 6-3/170—The freshman is well-known as a YouTube dunking sensation but will bring strong perimeter defense and energy as the fourth man off the bench. His offensive game isn’t as developed as Cohn, but look for Hurst to provide quality minutes while throwing down a few jaw-dropping dunks along the way.

“I’m very optimistic about this team. I really like the new guys on this team. Without those guys, we obviously don’t beat Regis (Saturday). But the returning guys also have an opportunity now, I’m sure those guys think they should’ve got more time last year but now they’ve got it so let’s see what they’re going to do.” -Larry Eustachy

Rams will see where they stack up early in the year on the road against the 14th-ranked Bulldogs at one of the toughest venues in the country.

A huge rivalry game in front of a packed Moby crowd is exactly why players come to CSU.

CSU could begin the New Year and conference play with a huge home win against a reloaded Aztecs team.

Winning Mountain West road games is tough anywhere, but especially in Logan, Utah. A win in the Smith Spectrum would be a huge boost early in the conference season.

Along with the Colorado game, Wyoming is CSU’s biggest rivalry. After being swept last year, the Cowboys will be looking for revenge in the final game of the year.