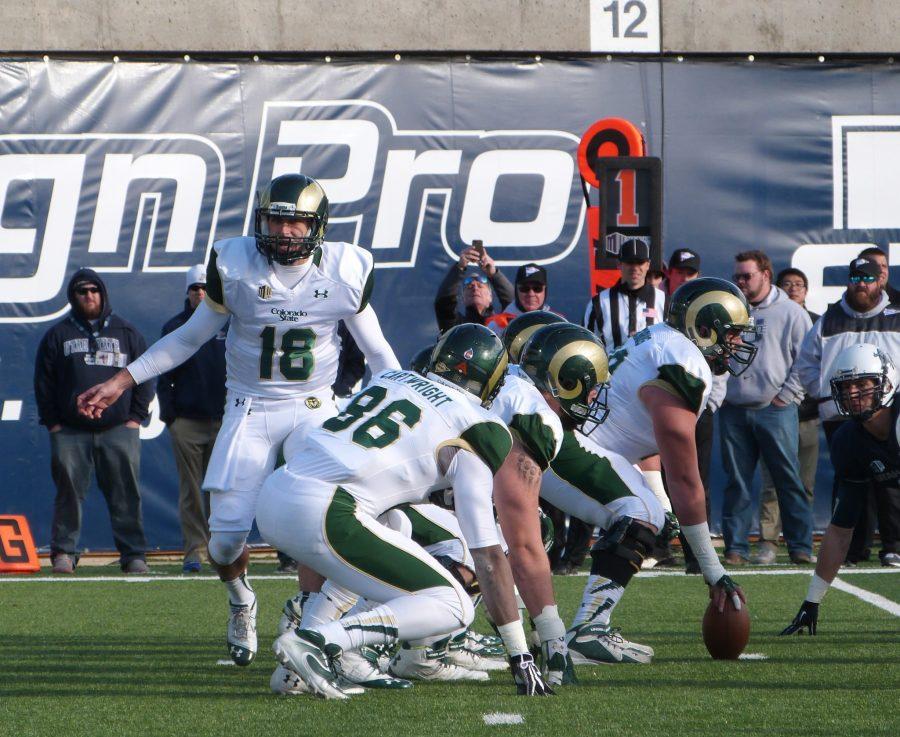 LOGAN, Utah — One week after posting 66 points in a win against New Mexico, the CSU Rams were shutout on the road by the Utah State Aggies 13-0 on Saturday.

Thee stout Utah State defense held running back Kapri Bibbs to just 54 yards, 40 of which came in the first half. Bibbs, the second-leading rusher in the nation in yards and touchdowns, could not help the CSU offense get anything going a

week after scoring six touchdowns and rushing for 291 yards.

“We kept shooting ourselves in the foot on offense,” center Weston Richburg said. “Their defense is already good, but once you shoot yourself in the foot and come back toward your own end zone, it’ll help them even more.”

While CSU’s offense struggled to produce, its defense performed better than it has all season. The Rams racked up four sacks on true freshman quarterback Darell Garretson, who completed just eight of 18 pass attempts for 43 yards, and held the Aggies to their worst offensive production so far this year.

However it still wasn’t enough for the Rams on Saturday.

“We didn’t help the defense out at all, because we couldn’t get it past the 50 yard line,” Richburg said. “Then we’d punt it, and they’d just bring us back down close to our own end zone.”

CSU linebacker Shaquil Barrett came up with 1.5 sacks, and also blocked a field goal attempt late in the second half to give the offense another chance, but Grayson and company could not capitalize after big plays by the defense.

“It is very frustrating,” Barrett said, “But we know it’s a team effort and we know our guys on the other side

(of the ball) were trying out there and we know they gave 100-percent effort.”

Grayson finished the day with 147 yards and his worst completion percentage of the season, completing only 16 of his 39 passes. He also tied his season high with two interceptions.

“It was tough,” Grayson said of the team’s performance. “But it comes back to us. We’ve got to help the special teams and defense.”

Linebacker Max Morgan also had a big day with a team high 20 tackles. He also helped the Rams convert a fourth down on a fake punt to keep the offense on the field. But the offense came up short on the drive after kicker Jared Robert

s had an uncharacteristic miss from 24 yards for just his third miss this season that would have put the Rams up 3-0.

The Rams (6-6, 4-3 MW), who need to win seven games in order to clinch a bowl berth for the first time since 2008, will have one more shot next  Saturday when they take on the Air Force Falcons (2-9, 0-7 MW ) on Senior Night at Hughes Stadium in the final regular season game.

Barrett, a senior, is optimistic about his final home game as a Ram.

“I think everybody’s going to come out and show everyone that we deserve to be in a bowl and will perform like it.”