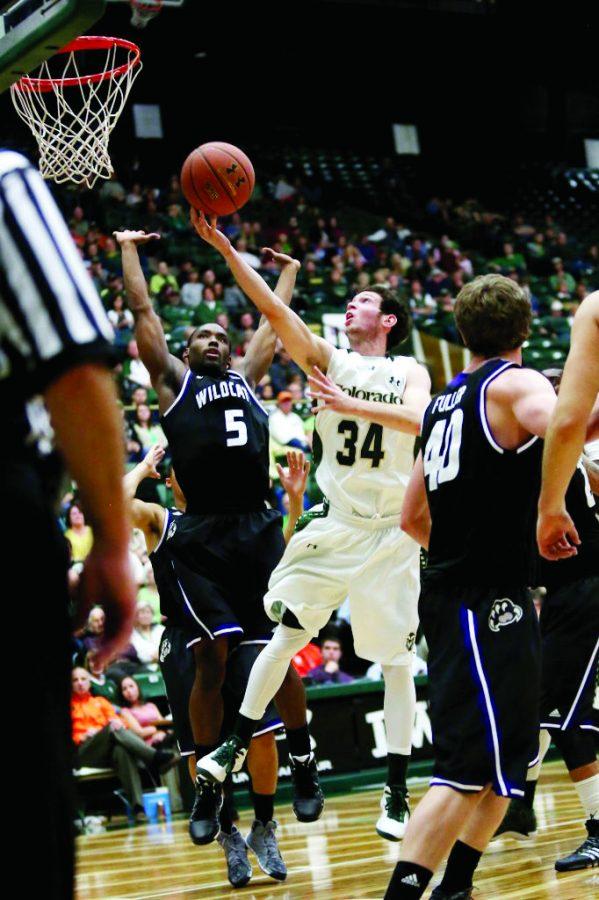 David Cohn (34) goes up for a layup and gets the and-one afterwards against Weber State last Saturday. Cohn had 8 pts. and 4 ast.

On the night of Nov. 11, most CSU freshmen were eating in dining halls or working on an assignment for class. Unlike his classmates, David Cohn found himself in front of a sold out crowd of 6,000 screaming fans.

True freshman Cohn made the first start in his career at The Kennel in one of CSU’s toughest matchups of the season, the Gonzaga Bulldogs. Despite the immense pressure that most 18-year-olds would have inevitably folded under, Cohn rose to the occasion finding himself as one of the top three scorers for the night.

Standing at 6’2” and weighing in at 170 pounds, Cohn isn’t someone you would pick off the street as being a top-notch athlete. His humble and unassuming demeanor accompanied with a carefree smile doesn’t portray a sharpshooter with a killer instinct on the court.

With his intense work ethic and drive, Cohn has already made a big impact on the Rams basketball team. In his two first starts, Cohn has hit three point shots at the buzzer and has made drives to the rim to get the and-one.

He’s made such a strong impression that head coach Larry Eustachy is calling him the next Dorian Green.

Before this season kicked off, Cohn was presented with the rare opportunity to not just play, but to be a starter. In early October, it was announced that senior guard Jesse Carr had suffered a career ending injury. This injury unofficially led Cohn to be Carr’s “replacement.”

“He’s done  a terrific job of (filling Jesse’s role),” Eustachy said. “He’s ahead of his time as far as being very mature. Basketball is extremely important to him and he wants to do well.”

In the midst of this whirlwind, Cohn is tuning out the noise and comparisons and is focusing on improving his game.

“I really didn’t expect this type of role,” Cohn said. “But the way it’s happened with Jesse and injuries and the way it’s fallen into place, I’m just blessed to be in this position. So I’m just going to keep working harder and getting better.”

“Obviously I can’t fill (Jesse’s) shoes because he’s an experienced guy. I was in the seventh grade when he was in my position. But I’m going to try to do my best and help with all my teammates.”

With four years of basketball ahead of this breakout player, Cohn and his teammates are all looking forward to what he can do for this program.

“He’s putting in work just like everyone else on the team but he’s willing to listen and he’s willing to work which is exciting,” junior guard Daniel Bejarano said. “Dave can get better every single day in practice and in games. Three years from now, I know Dave will be a totally different player.”

With this unique combination of talent, maturity and perseverance in a young player, there is nothing but success ahead for Cohn. However, all this young man is focused on is doing what is asked of him and helping his team.

As one of two team captains and the unofficial leader of this year’s team, Bejarano summed it up best by saying, “Once his name is called, he’s ready to play.”

Collegian Sports Reporter Hannah Cornish can be reached at sports@collegian.com and on Twitter @hmcornish.