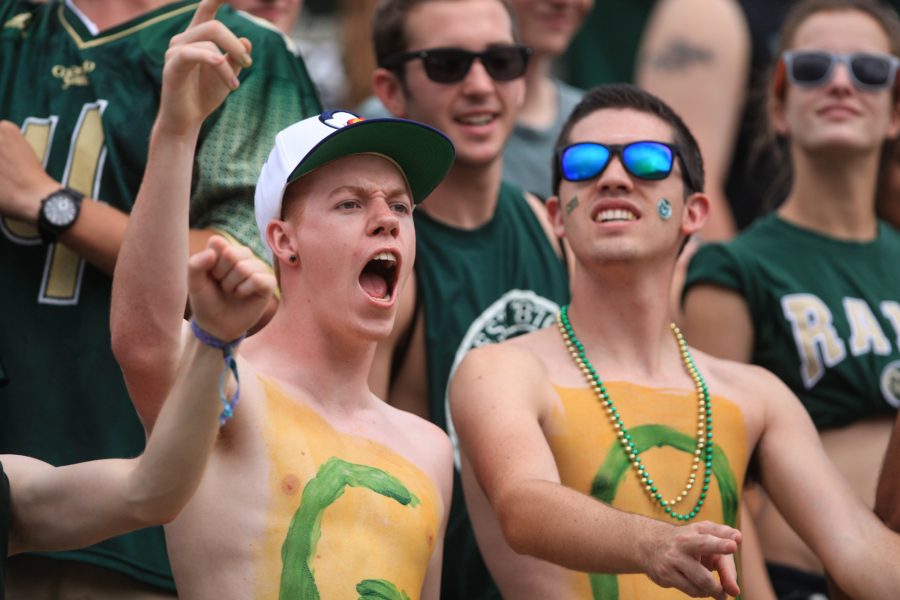 The smell of fresh-cut grass at Hughes Stadium on Saturday will symbolize more than good gardening, it means a new beginning for the Rams because their homecoming game against San Jose State marks the conference game of the season.

CSU is the last Mountain West school to play a conference game, so while it already has five games under its belt, none of them matter as much as this one, and those that will follow.

“There comes a time in everyone’s life where it’s time to change what people think about you,” CSU coach Jim McElwain said. “That’s how I see it. It’s a statement, and what statement are we going to make?”

The Rams’ 2-3 record is pretty standard among MW teams, with the exception of the nationally-ranked Fresno State Bulldogs, the squads fall along a similar curve.

McElwain is always one to stress that the current game is the most important game. He has hammered home this ideal among his players as well, so none of them are more excited about a game more than this week’s. But that does’t mean they can’t foresee the competition that awaits them in the rest of their division. Next week, the Rams will cross state lines for the annual battle against Wyoming for the Bronze Boot.

From there, the Rams take on Hawai’i at home. McElwain recognizes how tough this will be on his team, seven-hour flight aside.

“Anybody who goes to Hawai’i and wins has some resolve,” McElwain said. “That’s a tough place to play.”

Utah recently suffered a major setback after quarterback Chuckie Keeton went down with a knee injury in last week’s game against Brigham Young University. Still, Utah remains a force to be reckoned with.

Finally, the Rams get their shot at redemption, going head-to-head with the Air Force Falcons, who handed the Rams a 42-21 beat down last season. This year,  in addition to the Falcons’ off year, the Rams get home field advantage.

McElwain expressed the belief that his team is prepped to qualify for a Bowl game this year; to do that, CSU will have to win five of the seven conference games that are fast approaching. So what can be expected from each obstacle standing in their way? Take a look at the Mountain West shake-down.

The Spartans finished last season with a 11-2 record in the WAC under former head coach Mike MacIntyre, now the head coach at CU. The Spartans beat Hawaii last week for their first win in the Mountain West and travel to CSU this week to take on the Rams. Quarterback David Fales has received high praise around the country for his incredible accuracy. “(He’s) another one of those quarterback’s in this league that is high on a lot of people’s draft lists and deservedly so,” said CSU coach Jim McElwain.

The Bulldogs are the reigning Mountain West Conference Champions and were picked to finish first again with 39 first-place votes in the pre-season poll. They are well on their way to conquering that feat with a 5-0 record and quarterback Derek Carr, reigning Mountain West Offensive Player of the Year, has thrown for 1,864 yards with 19 touchdowns and four interceptions in five games. The No. 22 team in the nation, Fresno has separated themselves from the rest of the MW.

Coming off a 2-11 record last season, including a 33-11 loss to CSU, the Rebels have already won more games this season. The Rebels made a switch at quarterback during a game against Central Michigan when senior Caleb Herring took over for sophomore Nick Sherry. Herring has thrown for eight touchdowns over the past three games and zero interceptions, and UNLV has won three in a row under Herring.

The Aztecs finished with an overall record of 9-3 last season and went 7-1 in the Mountain West, including a 38-14 win over CSU. Junior college transfer Quinn Kaehler replaced starting quarterback Adam Dingell and has thrown for 982 yards and six touchdowns.

Nevada quarterback Cody Fajardo threw for 393 yards with two touchdowns last week in a thrilling overtime loss to San Diego State. Fajardo has thrown seven touchdowns this season with zero interceptions. Nevada finished with an overall record of 7-6 last season, going 4-4 in the Mountain West. The Wolf Pack will travel to Fort Collins to take on the Rams Nov. 9.

While the Warriors have yet to win a game this season, they’ve put up big fights against better teams in the Mountain West. Trailing 42-3 to Fesno State in their fourth game of the season, the Warriors scored 34 straight points in a 42-37 loss. CSU coach Jim McElwain said Hawaii is one of the most difficult places to get a win. The Rams will face the Warriors in Hawaii on Oct. 27.

The Aggies are coming off of a 31-14 loss at BYU, thanks largely to the loss of star quarterback, Chuckie Keeton who tore the ACL and MCL in his left knee. “I just feel sick about it, this guy was a joy to watch,” McElwain said of Keeton. “But they’ve got a lot of good players there, it’ll be interesting to see who steps up for them.” As of Oct. 4, USU had outscored their opponents 216 to 116, but without Keeton, those numbers will certainly drop.

Cowboys quarterback, Brett Smith is the man of the hour in Laramie. In five games, he has racked up 1,607 passing yards, along with 359 yards rushing. He is currently the second-leading rusher on the team. The MW has a flourishing of versatile quarterbacks, and Smith has earned a spot near the top. The Rams have not brought the Bronze Boot to Fort Collins since 2008, and they are hungry to change that. “It’s a game you got to be ready for, because they’re going to be ready,” linebacker Max Morgan said. “It’s always a good matchup.”

Once a top-25 football program, the performances from the Broncos the past two years have not met expectations. Still, they made a show out of UT Martin, taking the game 63-14, and just narrowly lost to No. 22 Fresno State 41-40. Under McElwain, the Rams would never underestimate them; “I think the Boise game is going to be a big one for us,” wide receiver Charles Lovett said. “Because of the tradition Boise has and the respect we have for them.”

Despite a rocky start against CU Boulder and Tulsa, CSU looks better and better each week. Although the schedules are random, the Rams feel thankful that they have had five games to prepare for conference play. “We were making a lot of adjustments early in the season, hopefully ironing out a lot of the kinks,” defensive lineman, Curtis Wilson said. “You’re putting your best foot forward in the games that really count. We’ve had a lot of time to put in that extra preparation.”

The strength of the Lobos offense is in the rush attack. With 1,839 yards on the ground, compared to opponents’ 1,150 – they have some fast feet. Running backs Kasey Carrier and Cole Gautsche are the two to keep an eye on. Carrier has racked up 685 individual yards and 8 touchdowns, while Gautsche, who has played one less game has 413 yards and 5 touchdowns. They will keep the Rams defense busy.

After taking their first and only win from Colgate 38-13 in week 1, the Falcons have struggled mightily to put points on the board. They have managed to score more than 23 points just once, in a 45-42 shootout loss against Nevada. The Falcons passing game has suffered severely, forcing them to play five different players at quarterback. They have posted just 23 passing first downs while allowing opponents to rack up 88. If Fresno State has elevated itself to the top of the division, Air Force has fallen to the bottom.