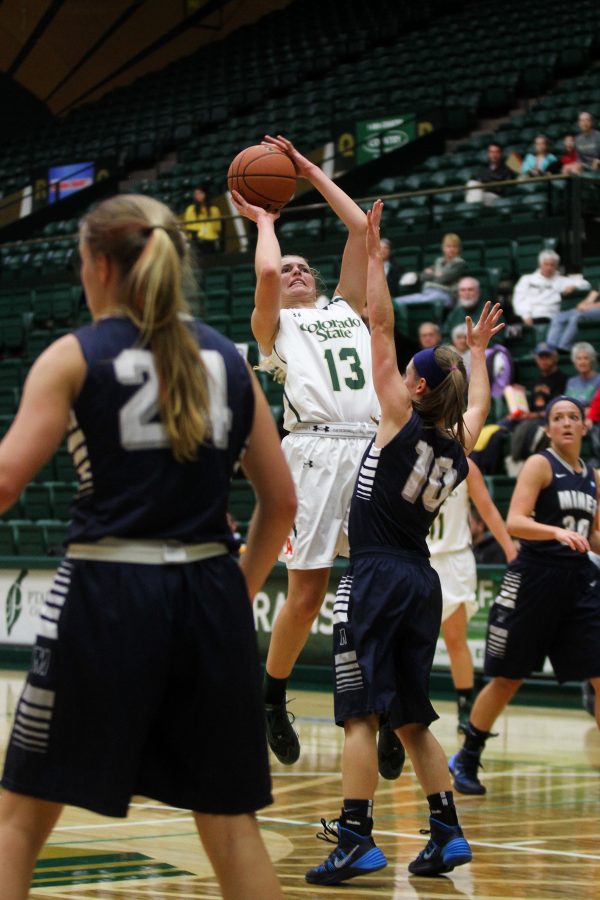 The Rams win over Mines 95-47 during a Women's Basketball exhibition held at Moby Monday night. The Rams look forward to a promising season.

With eight new faces on the team this season, the CSU women’s basketball team had a major concern for how cohesive the lineup would be in the early part of the year.

However at halftime when the Rams were up 45- 13 against the Colorado School of Mines and the first year players had 32 of those 45 points, many of those fears began to subside. The Rams went on to achieve their first victory as a new team, defeating the Miners 95-47 at Moby on Monday night.

“I was really nervous at first,” AJ Newton, a transfer from San Jose State, said. ”But it just felt good to bet out there playing after I settled down a little bit.”

Aside from the offensive success displayed early on in the game, the CSU defense certainly made a stance as well.

Many of the new faces on the team wasted no time letting their presence be known on the court. Newton was 5-8 from the three-point range and led the team in scoring with 18 points. Other key scorers for the team were guard Ellen Nystrom who totaled 14 points, and forward Elin Gustavsson who totaled 17 points.

When asked about the chemistry that the team exhibited in their first game playing together, head coach Ryun Williams saw a lot of positives, as well as room for improvement.

“I think you saw some pretty good chemistry tonight, there were a few missed cues because of chemistry tonight. But as these kids get more comfortable playing with each other, and learn how we run, I think you’re going to see better basketball,” Williams said.

“We knew we were significantly better (than last year),” Williams said. “I mean in our practices we’ve been quite a bit better; we compete a lot better. This is a very competitive group, and we anticipated that this group can have some punch.”

As far as congruity goes for the duration of the season, there is no other expectation but for it to improve. However, with this first game under their belts and it being deemed a relative success, much of the pressure is off.

When Newton was asked what she thought made their first game together so successful, her comments indicated that it was a team effort and something that has to be recognized early in the season.

“Just realizing early on that there is a lot of us so you just kind of have to get over it and just really really focus on gelling together,” Newton said. “So I think we just really understood that early on.”

Women’s basketball Beat Reporter Hannah Cornish can be reached at sports@collegian.com and on Twitter @hmcornish.