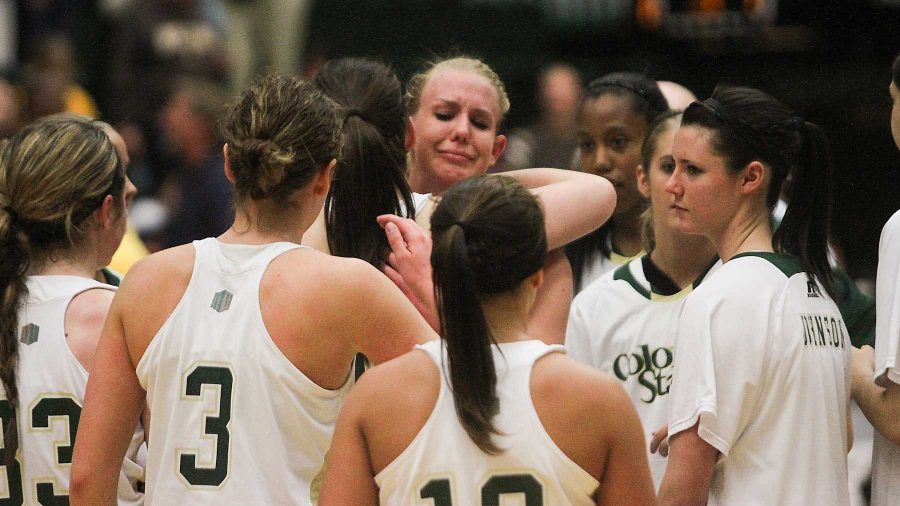 After playing 2,679 minutes in her five-year career at CSU, scoring 765 points, making 136 steals, 128 blocks, and 139 assists, Heimstra’s teammates watched as they knew their irreplaceable captain would never return to their home court.

“On my senior night, I left it all on the floor at Moby,” Heimstra said. When asked what she misses most about her time at CSU she said, “I really enjoyed my teammates. They were a really good support for me.”

As this 2013-2014 women’s basketball season nears its first tip-off, that feeling is mutual among Heimstra’s former teammates and coach.

“She was kind of a mother hen and she was really a solid chemistry kid,” said head coach Ryun Williams. “Meghan could just put her arms around this whole team and know what has to get done. It’s hard to replace a warrior like that.”

The legacy that Heimstra left at CSU is multi-tiered.

For those who knew her best, some of the words used to describe her were “athletic,” “physical,” and best of all, “a gorilla.” When her teammates were asked what specifically would be missed most about Heimstra on the court, her defensive presence and post-game were the most common mentions.

“We’re going to miss her leadership on the court and holding people accountable. We’re definitely also going to miss how physical she was offensively, rebounding, posting up, and defensively she got so many steals,” senior guard Hayley Thompson said.

Senior Sam Martin also had the opportunity to play with Heimstra, and agreed that her presence will be missed.

“She was just one of those people that always did the dirty work,” Martin said. “She didn’t always get credit for what she did in the games, and that’s what’s going to be so hard to replace; someone with her kind of capability and athleticism.”

But these comments of intensity were quickly accompanied by how caring Meghan always was for her team as well.

“Even in the locker room, Meghan was kind of always that person that was always joking around and bringing in a good mood. We would be down and she would just walk in and start saying some weird anchorman quote,” said Martin, remembering Heimstra’s sense of humor.

During her time here at CSU, Heimstra was the perfect juxtaposition of ferocity and compassion. Her former high school club coach Randy Pope saw both of these aspects of her playing style when she was as young as sixteen.

“When she was off the court, you missed her defense and we weren’t nearly as intense because she wasn’t apart of it. We would miss her intensity out there,” said Pope. “She’s off the court one way and when she’s on the court you want to stay out of her way because she’s going to kick your ass.”

One of the greatest challenges that the women’s basketball team will face this season will be replacing the different aspects that Meghan provided both on and off the court.

Finding a single player that can instantly fill Heimstra’s shoes will be a challenge; but with eight new faces on the team, they are all sure to bring something different to the table.

“I’d definitely say (replacing Meghan) will be a collective effort,” said Martin. “We’ve got so many girls and only 10 or 11 practices so far so, you know, I think it’ll come as people get more comfortable.”

Williams corroborated Martin’s analysis of this new line-up, knowing that filling the void left from Heimstra will be a process.

“We’ve got some nice pieces. We’ve got some kids that can play equally as hard, equally as physical and be just as productive, “ he said. “In time we can surely fill that void but I think early on it’s going to have to be a collective effort.”

The legacy that Heimstra left is not one that will soon be forgotten. All of the new faces on the team have heard Meghan’s name and know exactly what she accomplished for this team.

“Our kids know who Meghan is,” said Williams.  “They know what Meghan meant to our program. Meghan will always be a huge part of our Ram family. I mean she gave her heart and soul and sacrificed her body. I mean she could barely walk off the court the last game. She ended her career the right way and our kids know that and we’ll hopefully carry that torch that Meghan carried.”

Sports writer Hannah Cornish can be reached at sports@collegian.com.