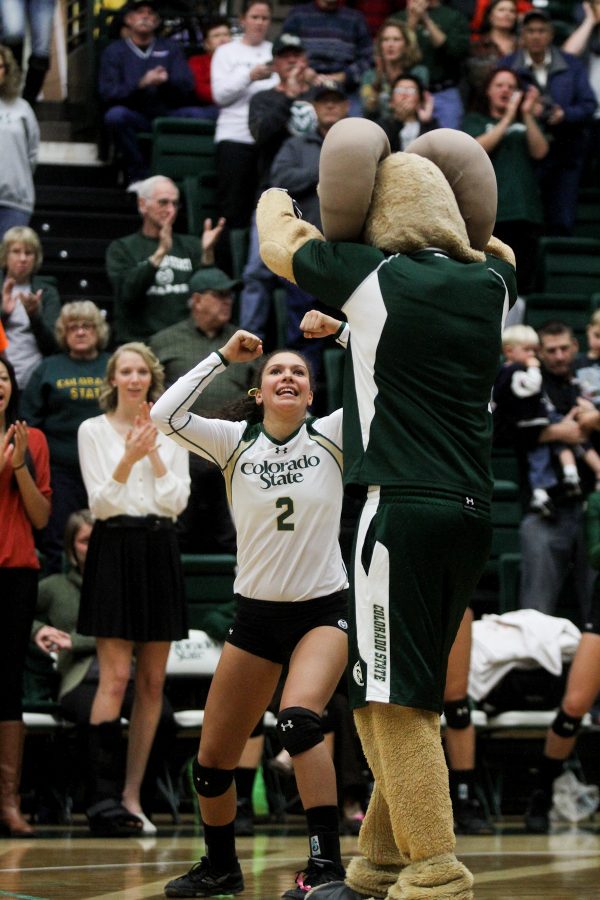 The Rams win over Fresno State 3-0 at Moby Arena on Thursday. The Rams further extend their winning streak yet again with this win.

Thursday night was anticipated to be the last opponent in the first half of Mountain West play with the ability to knock off the Rams. Despite a continuing battle at the net and digs bumped on across-the-court saves, CSU collected its 18th win of the season.

It was a three set sweep in Moby for CSU (25-20, 25-19, 25-23). With a dominant lead established early on, the Rams increased the struggle for the Bulldogs to come back from up until set three. A last-minute substitution of Cayla Broadwater made the difference in the set three comeback.

CSU came back from trailing Fresno State 19-11 to win its first of two games against the Bulldogs.

“It’s very rare that you win a set when the other team has 13 and you have eight,” head coach Tom Hilbert said. “It was a point run made possible by subbing in Cayla for Kaila; that was obviously the biggest point.”

CSU improved to (18-0, 9-0 MW) with one game remaining in the first half of conference play.

In the first point of the game, CSU began with an error off a missed set. Though the Rams trailed by just one point, the moment jump-started a victorious consistency fans are used to watching in Moby Arena.

“They were not sucking all of our energy and then having the crowd at Moby to back us up point by point really helped a lot,” Deedra Foss said.

From that point on, the Rams dominated the Bulldogs on blocks, digs and kills. It was not until the final points when Fresno State began to show life against CSU.

On back-to-back errors, Fresno State came within one point of CSU. Thanks to several key attacks by Marlee Reynolds and Kelsey Snider, the Rams closed out set one on an offensive rally. An additional cushion came in set one off three errors by the Bulldogs within the last five points. Fresno State collected 11 errors in set one, hitting .000 on 34 attempts.

The Rams allowed the Bulldogs to rally back similar to the previous set, causing Hilbert to call for a timeout midway through the second set. The Rams lost a lead of 16-8 before the Bulldogs rally altered the score to 17-12.

“That’s the thing I was disappointed about,” Hilbert said. “Our serve receive broke down for the first time I have seen this year. It was terminal break down; we had build up enough cushion in set one and two to survive that.”

After two more points in favor of Fresno State, CSU took back the control on a kill by Samantha Peters, her sixth of the night.

Prior to Thursdays game, Hilbert knew it was pivotal to shut down outside hitter Korrin Wild. She had the ability to hit spots the Rams have yet to see this season, however Wild remained unsuccessful with only 14 kills and hitting .079, giving up 11 attacking errors.

The inability to defeat the CSU defense resulted in a silenced Fresno State.

“The crowd was fantastic. They always are,” Hilbert said.