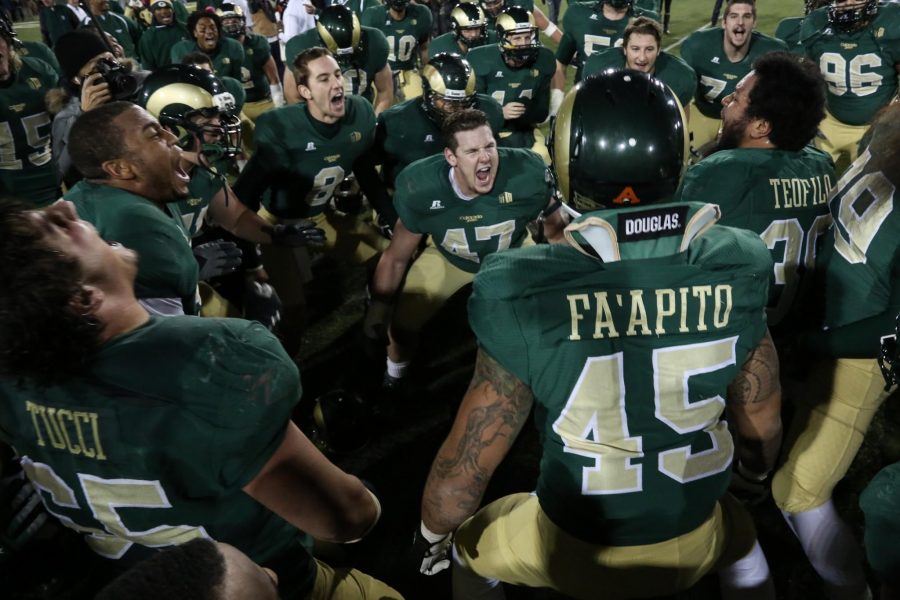 Senior Zach Tiedgen, 47, leads the team in a victory chant after Saturday's win over New Mexico at Hughes stadium. After fighting back and forth the entire game, the Rams previled 24-20 over the Lobos to end the season 4-8.

Saturday’s game against San Jose State at 1:30 p.m. MT is their chance to do that.

The Rams haven’t had a winning season since 2008 and have played poorly against conference rivals over the past four years. With a clean slate heading into the second part of the season — CSU is the only team in the Mountain West that has yet to play a conference game — the time has come for the Rams to win the minds of fans.

“This will be a huge test for our guys to see where they’re at,” McElwain said. “I say that from the standpoint of, it’s our opportunity to make a statement. What kind of statement are we going to make?”

Coming off of a bye week, they may have had time to think about it.

“We’ve had a lot of time to put that extra preparation into really making sure that we’re ready to go,” said defensive lineman Curtis Wilson.

The Spartans are coming off a win against Hawaii but had lost their three previous games. Still, they aren’t a team to be taken lightly. Last season they went 11-2 as a member of the Western Athletic Conference under former head coach Mike MacItyre, now the head coach at CU-Boulder. Plus, they’ve got a lethal weapon in starting quarterback David Fales, a quarterback McElwain said the nation will soon be watching on Sundays.

Last season, Fales completed a FBSbest 72.5 percent of his passes for 4,193 yards accompanies by 33 touchdowns and nine interceptions. He is one of the most accurate quarterbacks in the nation.

“He’s a guy that can fit the ball, when he gets his feet set, in any window,” McElwain said. “Given his explosive plays in this last week, when they were down a little bit in Hawaii and then came back, were a direct correlation to how he delivered the football to people on time in small windows.”

That explosiveness may be a concern for the Rams as they’ve had a tendency this season to give up big plays.

“Tendency? That’s a tendency?” McElwain said when asked about his team giving up explosive plays. “I consider that a fatal flaw.”

Still, McElwain looks forward to the challenge presented to his team to see what they can do about the big playmakers.

Explosiveness aside, the Rams’ defense has fared better over the last few games, especially behind a big playmaker of their own in linebacker Shaquil Barrett. He’s compiled 6.5 sacks this season and last week he was named the College Football Performance Awards’ National Defensive Player of the Week for his performance against the UTEP.

“He’s a really good player,” said San Jose State offensive lineman Nicholas Kaspar. “It is a challenge but we’ve watched film on him and we see a lot of stuff he can do. We do watch film, but we don’t really change a lot of what we actually do (to prepare for Barrett). We just know he’s there.”

Former Ram to be honored

CSU will honor former football standout and College Football Hall of Famer Greg Myers during halftime of it’s Homecoming game on Saturday. The former defensive back played for the Rams from 1992-95 and was drafted in the fifth round of the 1996 NFL draft by the Cincinnati Bangals. Myers was originally scheduled to be honored during the Rams first home game but the date was pushed back after September’s devastating Colorado floods.