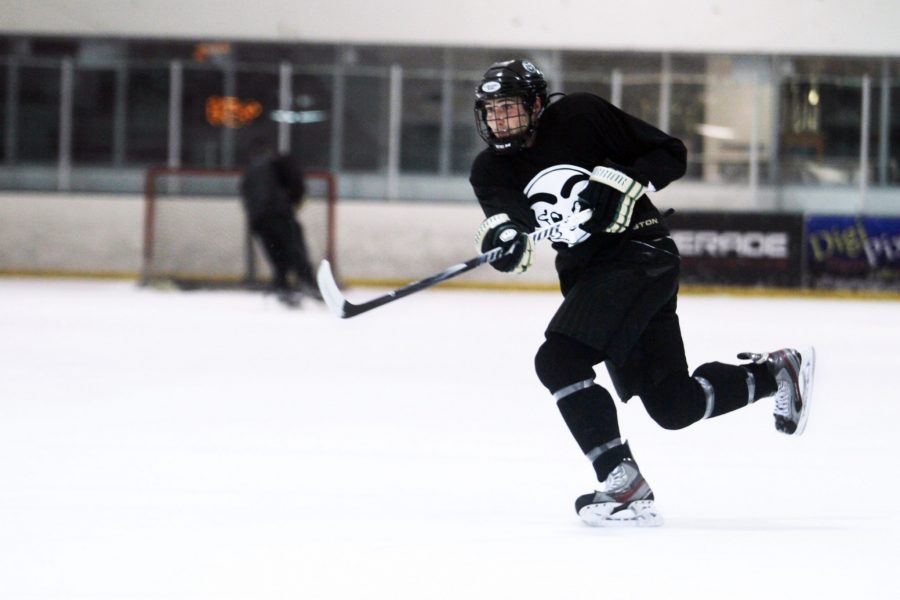 CSU hockey player speeds across the rink during sprint drills at a late night practice.

A lack of success on the attack held back Colorado State hockey in its Division I debut.

Despite a hard-fought effort on the defense for CSU, the Rams could not overcome a consistent lack of shots on goal. The Rams took on three of the top teams in the Athletic College Hockey Association at the Division I Showcase in Ohio this weekend only to be sent home empty handed.

“I wish we could have been rewarded for how hard we worked and how hard everyone gave it their all,” captain Jamison Wicks said. “It was just one shot that could have went the other way or one bounce that we needed.”

The Rams came in full of nerves, excitement and a drive to prove themselves in the ACHA Divsion I. In two close games on the defense and one determined by penalties, CSU hockey concluded the weekend 0-3 against Ohio (2-1), Davenport (1-0) and Stony Brook (4-1).

CSU started the Division I showcase against Ohio on Friday with the struggle of net completion. This continued into Saturday’s game against Davenport and Sunday’s against Stony Brook where the Rams remained unable to answer opponents on the attack.

“I would say for probably 80 percent of the game we were the better team,” head coach Kelly Newton said. “Unfortunately we came up on the bad end of a 1-0 score.”

Though the Rams fell in all three games of the weekend, CSU out-shot Davenport 36-31, along with leading Ohio 23-21.

“We’re not getting a lot of good net-drive right now. We need guys that are going to have to pay the price every now and then. You know going hard to the net and bring knocked down or creating opportunities that way,” Newton said.

The stops of junior Alex Steidler in goal kept CSU in the game. Coming into this season, Newton knew Steidler would be the biggest support or the Rams defense, as it showed this weekend. Steidler allowed seven goals to pass in three games, while blocking over 70 shots on goal.

In the final game of the weekend, CSU pilled up penalties that came back to hurt. Stony Brook scored three goals against CSU on a five on three power play.

According to coach Newton, it is rare to have those types of power plays in ACHA hockey, let a lone three in one game.

The penalties all came from calls against the Rams, which resulted in three players thrown from the game: Straw for a hit from behind, Tamai for spearing and Zac Novack also on a hit from behind.

“We really struggled on the power plays this weekend,” Jordan Gynatowski said. “It’s hard because we were right there with all those teams this weekend. It proved that we can be here and play against the best, we just have to finish strong the attack to win.”

With heads held high after its first appearance in the Division I, CSU leaves the ice knowing what must be done in practice this week.

The Rams will need to bounce back for Saturday’s up coming game against CU-Boulder at the Pepsi Center. CSU will then have one week to prepare for another weekend of Division I play.

“Our biggest thing we learned is just playing hard every shift,” Newton said. “At this level if you let up even for a minute you are going to give up a good scoring opportunity to a team, we found that out this week.”

Hockey Beat Reporter Haleigh Hamblin can be reached at sports@collegian.com and on Twitter @HaleighHamblin.