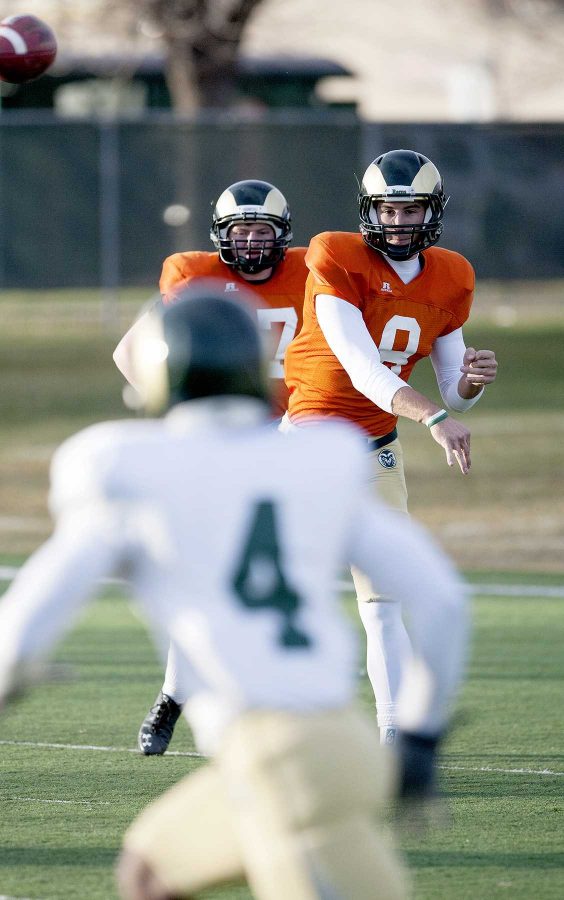 Craig Leonard (8) throws to Charles Lovett (4) during practice on Wednesday. They play at Boise State this Saturday.

Injuries and football are practically synonymous. Anytime a player takes the field he is putting himself at risk to being injured. In football, next man up isn’t simply a concept — it’s a mentality.

Through the first five games of the season, the Rams have managed to stay relatively healthy. Head coach Jim McElwain credits the low amount of injuries to strength and conditioning programs players have undergone as well as the work they put in during the offseason.

Still, the team has been missing some key players.

Wide receiver Charles Lovett, one of the Rams’ most productive players last season, has yet to see the field this year as he’s battled a knee injury. On Monday, McElwain said Lovett will be a “full-go” in practice this week and the team will evaluate his status from there.

“We’re excited about that and what he may bring as a boost from an explosive standpoint to our offense,” McElwain said.

Lovett, who led the Rams last season with 35 receptions for 428 yards, said it has been difficult to watch his team from the sidelines.

“It’s real tough, it’s stressful,” Lovett said last week. “I feel like I can’t do anything about the situation.”

Though he hasn’t been able to take part in game action, Lovett said he’s tried to remain positive and to be there for his teammates in any way he can.

“I just keep encouraging them to do even better than they did the week before,” he said.  “If they drop a ball, forget about it. There’s nothing you can do about it, you can’t go back and catch the ball again, so just forget about it.”

Fortunately for the Rams, other guys have answered the bell when their number has been called.

With Lovett’s absence, sophomore receiver Joe Hansley and freshman Rashard Higgins have emerged as key weapons for quarterback Garrett Grayson. Both Hansley and Higgins have the highest number of receiving yards among all receivers and tight ends with 250 and 327, respectively.

While his young receivers have been reliable playmakers, Grayson is excited to be able to add Lovett back into the mix.

“I’ve been giving him a hard time that he’s not out there yet,” Grayson said. “I’m excited to get him back and get some experience out there, you know, show the young guys what to do.”

If injuries and football go hand-in-hand, so does the notion of playing through the pain as many of the Rams have done this year.

Linebacker Max Morgan sat out the first part of the game against UTEP with a shoulder injury but quickly returned after his back-up, Deonte Clyburn, was hurt. Morgan is expected to be back at full strength on Saturday while Clyburn will be out with a knee injury.

A scary moment occurred during the Rams last game vs. UTEP when cornerback Bernard Blake was carted off the field with a neck injury and taken to a nearby hospital for precautionary reasons. Blake is expected to play this week after practicing in full pads during the bi-week, according to McElwain.

Wide receiver Jordon Vaden is expected to be out another week, but McElwain is hopeful Vaden will be ready to play for the first time this season next week.

Being ready physically and mentally is something McElwain will look at when determining who will play each week.

“As I’ve said, I will never put a guy out there that’s not totally all in,” he said.