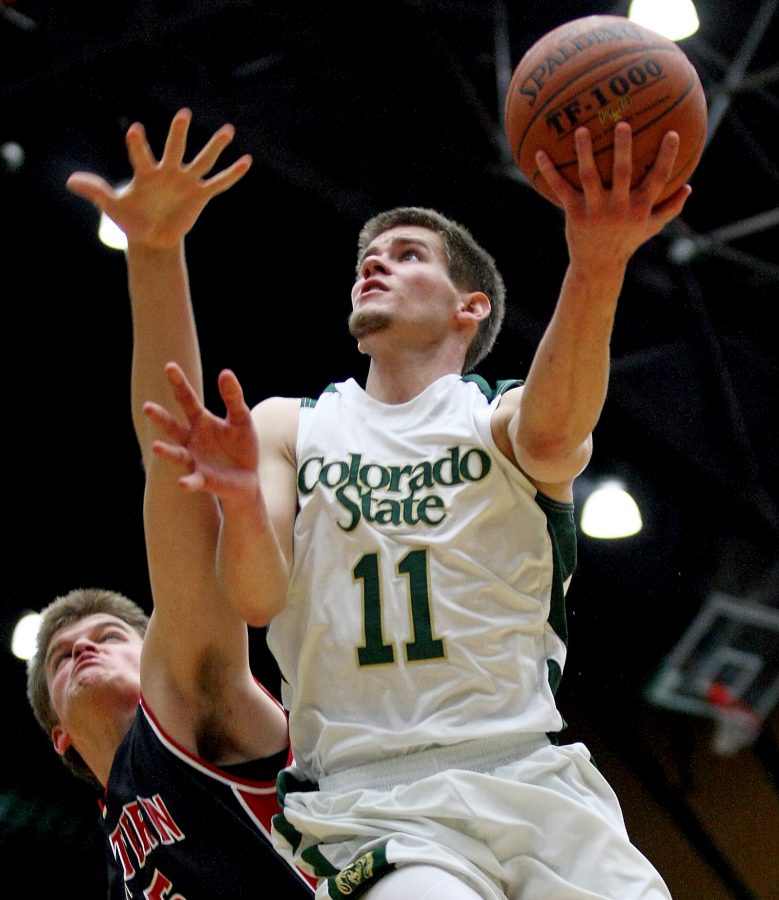 Sophmore guard Jesse Carr (11) fights to get to the basket in the second half of the 89-52 win over Western State at Moby Arena in November, 2010. The Rams will tip off the regular season Saturday at 7pm in Moby Arena verse Arkansa- Pine Bluff.

Quentin Sickafoose: Would you mind just walking me through what happened at practice Monday when your injury happened?

Jesse Carr: We showed up for practice Monday morning, it was just a regular intensive drill and I had been feeling fine and 100-percent for quite a while. I went in on a close-out, planted on my same knee that I tore last year, changed direction and heard it pop. I knew it was the same feeling of instability that I had when I did it last year.

QS: You mention that feeling of instability was there, but did you know right away that it was as severe as it turned out to be?

JC: Yeah, I knew that my ACL was no longer there.

QS: At the point when that feeling sets in, what is running through your head?

JC: It’s really just shock. Like when it happened last year, I didn’t exactly know what had happened. This year was a little different because I had known the feeling of what it was like to tear it. I was just in shock not knowing exactly how bad it was but knowing that my ACL wasn’t there any more. So obviously, that’s pretty bad.

QS: Which emotions accompany that? Are you feeling anger, sadness, fear or any of the above?

JC: It’s a mixture of everything to be honest. All the work that I’ve put into rehab and coming back strong over the past year just put down the drain. I’m definitely sad, a little bit in shock, and angry that this could even happen but there’s definitely worse things out there I guess.

QS: Have you had a chance to talk to your teammates yet?

QS: Any idea on how they’ll take it?

JC: Everybody already knows that I tore my ACL and they know I’m not going to be playing this year, some of the guys that I’ve seen have almost been in disbelief that it could even happen again. It’s a shocking deal for everyone involved.

QS: What’s next for you, Jesse?

JC: I’m planning on finishing out through December and being with the team. Right now, I’m just taking it day by day and seeing where everything goes from there.

QS: When you look back on your career at CSU, what is your overall feeling of your time spent with the program?

JC: Like I told (Assistant Director of Media Relations) Danny Mattie earlier for the press release, it was all a rollercoaster-type experience for me but I’m glad that it even happened and that I got the opportunity to play for CSU.

QS: Anything else you want to put out there for the Ram fans?

JC: Just that I appreciate them, and definitely thank you for the years that they stuck by our side through the thick and thin of CSU basketball. I also appreciate all the kind words that people have been giving me, I still look forward to staying with the team through at least December.

If the slideshow does not appear, please refresh the page.

During the second official practice of the 2013-14 CSU men’s basketball season, Rams point guard Jesse Carr suffered an injury to his left ACL on Monday for the second time in a year, ending his final NCAA season before it even began.

The Ainsworth, Neb. native appeared in 93 games during his career at CSU, starting in 23 of them. Carr’s six-year stint with the Rams featured 598 points, 218 rebounds and 204 assists.

CSU head coach Larry Eustachy and the university broke the news in a press release on Wednesday afternoon.

“This is just a devastating injury,” Eustachy said in the statement. “Jesse worked harder than anyone to get healthy and get back on the court. This is going to be an extremely tough time for him, but our coaching staff and the entire program are behind him.”

Carr was granted a sixth year of eligibility by the NCAA in early May of 2013 after sitting out his redshirted fifth year due to tearing the same ACL he re-injured on Monday.

“Since this is all new I don’t know exactly what my plan is going forward,” Carr said. “I do know that while I am here I want to help the team and coaches in any way possible. I also realize how lucky I am to have received the education that I did, and even luckier to have been around the people that I’ve been around here at CSU. It has been a rollercoaster-like experience but I wouldn’t trade it for anything.”

Carr played part in the Rams’ rebuilding process under former head coach Tim Miles along with four other recruits. Carr started 18 of the 25 games played in his debut season as a freshman in 2008-09, averaging 8.8 points per game with 63 assists. He redshirted his sophomore year, sitting out the 2009-10 season.

In 2010-11, Carr helped CSU in its postseason run in the 2011 National Invitation Tournament.