Thanks for the memories, Todd Helton 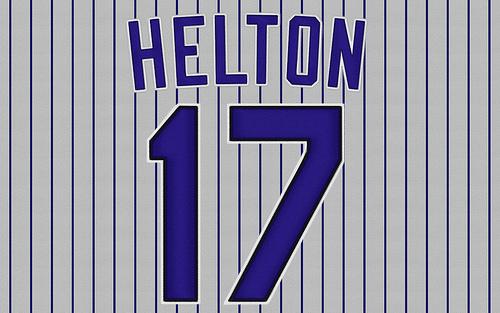 The amount of Boston fans outnumbered the Denver ones, the Red Sox clobbered the Rockies 15-5 and Colorado missed out on the postseason for the fourth consecutive year.

But when the final pop-fly was caught for the third out in the bottom of the ninth inning, none of that mattered — we were all there for the same purpose.

My arm hair stood straight up as I watched my childhood idol circle the grounds of Coors Field for his last time, just before he exited the stage with his final bow. He took the time to go out of his way and connect with the fans along every angle of fence that lined the park.

As I waited patiently for my turn, I knew it would be a moment that I wouldn’t forget for the rest of my life.

Time stood still as he inched up the first baseline, and despite the 70,000+ people in attendance all cheering in tribute, all I could hear was silence. My hand made contact with his, shaking as we made eye contact. No words were needed, I gave thanks for the past 17 years with my eyes and he shot it right back.

The moment was short-lived and he carried on, the Foo Fighters filtered through the stadium speakers with “there goes my hero.” Fighting it would have been a pointless battle, so I decided to let the tears stream from my eyes, down my face and drip off the edge of my chin, knowing damn well they deserved to be there.

That moment of clarity was all I needed.

Both parties knew it had to be done. We were growing apart and as tough as it was to sit back and let it happen, the Toddfather and I both knew it was the right thing to do.

So there he went into retirement, the guy who lived on my wall in a poster for so many years, just gone forever.

When my love for baseball first developed, Helton didn’t grow any facial hair. It was the full-shave, clean look he wore for his first few years in the league. As I grew older he got better, becoming a franchise player of the Colorado Rockies organization about the same time I was 15 years-old and thought I could rule the world, just like Todd. When my twenties hit, Helton became wiser, more patient with his pitches and aware of his surroundings.

On Wednesday night, I put my life in chronological order in sync with Todd Helton’s Major League Baseball career. The next step is to figure out what the hell I’m going to compare my thirties with.

I’m going to miss you, man. I will never be able to express the amount of impact you’ve had on my life. My favorite part of being in Denver has always been yelling “Toddy Ballgame!” every time I saw No. 17 stepping up to the plate.

Thanks for the memories, Todd.

Sports Editor Quentin Sickafoose is a die-hard Denver sports fan. He can be reached at sports@collegian.com and on Twitter @QSickafoose.