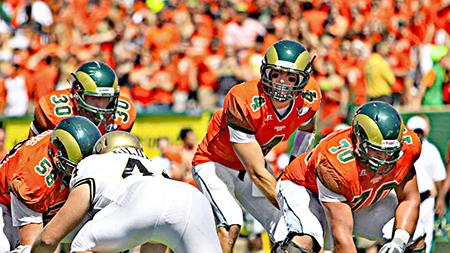 Starting quarterback Pete Thomas (4) looks out to one of his recievers setting up for a play at the Ag Day game last year at Hughes Stadium. This Saturday the Rams will play Utah State at Hughes.

Rams head coach Jim McElwain is ready for Saturday. He came off the practice field both Tuesday and Wednesday sporting an orange Colorado State baseball cap in honor of this week’s ‘Orange Out’ game at Sonny Lubick field at Hughes Stadium vs. the University of Texas El Paso.

For the fourth year in a row, the Rams will represent a piece of the university’s past when the now green and gold CSU Rams were known as the pumpkin and alfalfa Colorado A&M Aggies. Rams fans are also encouraged to don the Aggie orange at Saturday’s game.

The Rams will wear orange jerseys with matching helmets and white pants. The team has not seen what the Under Armour jerseys will look like this year but they are expected to be slightly different from the previous years when the university had a partnership with Russell Athletics.

“We’re excited about it,” said quarterback Garrett Grayson. “We like to represent the history.”

The pumpkin-clad Rams are 3-1 in ‘Orange Out’ games, with three wins vs. Idaho, Northern Colorado and Hawaii. Their lone loss came in 2010 vs. BYU in a 49-10 blowout loss. The Rams wore the orange jerseys twice in 2010 after then head coach Steve Fairchild allowed the seniors to choose the game day attire for Senior Day.

“You can tell everybody knows the tradition and they’re excited to put the orange on for a change,” said defensive back Shaq Bell about seeing orange in the stands. “As long as we keep winning, I don’t mind wearing them.”

The first ‘Orange Out’ game for a CSU athletic event took place at a men’s basketball game, according to Gary Ozzello, senior associate athletic director for community relations. Former men’s basketball coach, Tim Miles, and members of the athletic department, were looking for a way to honor CSU’s past.

After the football season had already passed, it made sense, Ozzello said, to introduce the idea during the basketball season.

“The athletic department sponsored an orange out game and it went over so well we expanded it to football, women’s basketball, volleyball (and) softball,” Ozzello said. “Now we have orange outs in many of our sport programs and we do it as a means to honor the history and tradition of Colorado A&M and the Aggies.”

Saturday’s game will feature a lot of orange on the field, not just from CSU. The UTEP Miners also wear orange as part of their attire. McElwain said Monday that he  heard the Miners will wear white jerseys with orange pants and orange helmets.

“It’s a historical game for this university,” McElwain said. “It’s (the players’) responsibility to give back to what came before them.”

Saturday’s game vs. UTEP is set to kickoff at 1:30 p.m. MT at Hughes Stadium.