Kapri Bibbs runs in a hat-trick of touchdowns against UTEP 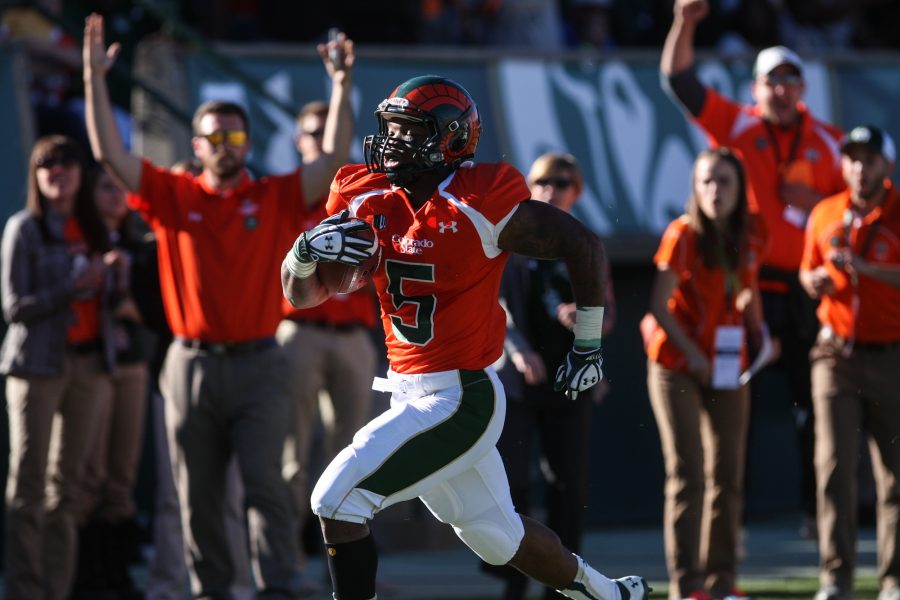 Kapri Bibbs does not take no for an answer. Heading into this week, the sophomore was listed as CSU’s third running back on the depth chart; then he scored three touchdowns.

Even though head coach Jim McElwain says the chart doesn’t really matter, Bibbs will not likely stay listed as third.

“I thought Kapri came in there and gave us some juice on some runs and gave us some energy,” McElwain said in the post game press conference. “I am happy that he can finish runs and that he has shown that, it’s great to see.”

In his five games as a Division I athlete, Bibbs has six touchdowns and 370 rushing yards. The two backs listed above him, Chris Nwoke and Donnell Alexander each have a touchdown and 325 and 103 yards, respectively.

Obviously the three of them have different strengths and struggles, but Bibbs has steadily eliminated many of the weaknesses coaches may have seen in him in the past.

In his first game against CU, Bibbs ran in two touchdowns but made a costly fumble that changed the tide of the game. Since then, he has worked on his ball security, and despite taking hard hits against UTEP’s stiff defensive line, the ball stayed in his hands.

Of course, the speedy manner with which he evades tackles makes it easier on himself, while giving his teammates and fans in the stands a fun show to watch.

“We are just so happy to see that,” offensive tackle Jared Biard said of Bibbs’ performance. “We see glimpses of that in practice all of the time, so we knew it was there but it is nice to see it show up in a game.”

After getting the jump on UTEP 28-7 in the first half, the Rams allowed quarterback Jameill Showers and receiver Jordan Leslie post three touchdowns in seven minutes to tie up the game in the third quarter.

Linebacker, Shaquil Barrett gave the Rams a spark, forcing two fumbles and a safety, and Bibbs picked it up and ran with it.

“It’s easy for the offense to fall into the mindset of ‘lets get a first and get out of here’,” tight end Kivon Cartwright said. “But we were going out there every down to score, and Kapri new that; he stepped up big.”

Bibbs made a 37 yard touchdown scamper, breaking numerous tackles and kicking off a 24-0 run for the Rams.

UTEP would put up two more touchdowns before the game was over, but Bibbs helped the Rams seal the deal with three minutes left in the game on a 34-yard run into the end zone.

For McElwain, it was the perfect way to cap off the weekend before their bye week.

“I like this football team,” he said. “They are learning about how to be accountable, they are learning how to care of each other. We are going to have a great off-week and hopefully get a lot of guys back healthy.”

Football Beat Reporter Cali Rastrelli can be reached at sports@collegian.com