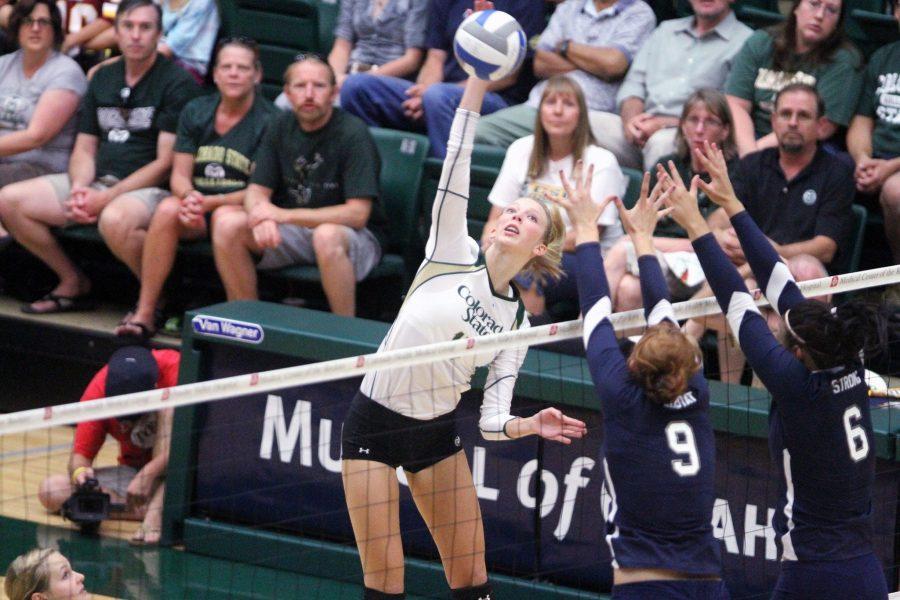 Freshman outside hitter Michelle Lawrence (17) goes in for a kill against the UNC Bears Tuesday night at Moby. The Rams won, sweeping the Bears in 3 sets.

Michelle Lawrence came into her freshman year at Colorado State knowing this would be her chance to show her ability, but what she didn’t know was the leadership role she would take on in her college debut.

While most freshman face crowded lecture halls, shared community bathrooms, relationship troubles and homesickness, Lawrence focuses on kill percentages and getting her arms up for the block. In her first year, Lawrence has already made her mark on the court with 65 kills over six games for CSU volleyball.

“When she came in, what we wanted to do was get her to be more explosive to the ball,” CSU head coach Tom Hilbert said.  “I felt like she has more ability than what she was using as an attacker, it became evident that she was going to be one of the best outside hitters on the team.”

Lawrence was first presented with the opportunity to start right off the bat, taking the floor with the other Rams in CSU’s 2013 home-opener against the University of Baylor.

However, in Lawrence’s path to Division I athletics, volleyball was not the only sport she acquainted herself with.

“In seventh grade she decided she wanted to try volleyball, basketball and track,” Steve Lawrence, her father, said. “So she wanted to try everything. At that point she swam and played soccer, she played just about every sport except for softball.”

As she progressed into high school, Lawrence found her niche as the volleyball team’s middle blocker. Continuously growing from seventh grade through her freshman year,  she towered at six feet tall.

“Knowing her ability, I felt that she would best be used going to the outside. I saw the potential in her to be about a top outside hitter,” Northgate High School coach Dave Wieland said.

It’s a rare occasion that coaches know from first sight that a player will go on to play at the collegiate level, but in his time with Lawrence Wieland know it would happen all along.

“A (Division I) future was meant for her. If you could just see the ability, the athleticism, the desire, the key components of what an athlete needs to succeed at the next level, that’s what she had,” Wieland said. “She is getting stronger I think as it goes on. The thing with Michelle being new is that no one really knows all her capabilities yet. So it makes it a little bit harder to defend.”

The on-court experience did not stop in high school for Lawrence. In her freshman year she played on two local club teams before advancing to the NorCal Volleyball Club in Pleasanton, Calif., where she competed against her new teammate Cassidy Denny.

“We’ll it’s actually funny because my team actually lost to her team in club,” Denny said. “But I feel like this season at CSU she’s so much of a bigger impact and player than she was in club. In club she was just that good outside hitter, here she really stepped up the roles of a freshman.”

For Hilbert, Lawrence’s success at CSU has been years in the making. He knew he wanted her for his program, knowing he could get her to compete at the high-level she was capable of.

The only thing he didn’t realize was how quickly she was able to make it actually happen.

“I saw her during her junior year,” Hilbert said. “It became pretty evident that she was not only long and tall, but she was athletic. We knew the potential was there for her to be a great player, I wasn’t sure it was going to come this quickly.”