CSU volleyball sweeps the Cowgirls back to Laramie (with PHOTO) 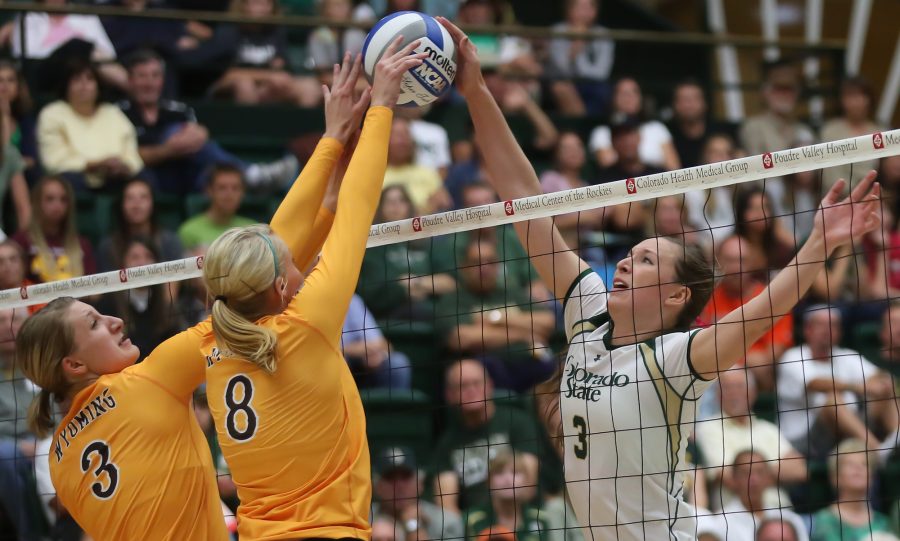 Wednesday marked the first of two games between rivals Colorado State and Wyoming. In the fist Mountain West match of the season, the Rams showed no mercy in a 3-0 sweep over the Cowgirls (25-23, 25-22, 25-21).

CSU earned its 60th all-time win against Wyoming and 32-3 all time under head coach Tom Hilbert, including 17-0 at Moby, on Wedesday night. The Rams are now 9-0 on the season, the fourth-best start in program history.

Out of its last four matches, Wyoming has lost three. The Cowgirls are 7-4 on the season and 0-1 in the MW.

“The story of the match is they stay with us to 20 and we win at the end,” Hilbert said. “All three sets were like that. What that shows is that our team is pretty steady and they compete and they make the right plays and right decisions at the right time.”

Hilbert knew coming into the game that it would be a battle of blocking and avoiding the Cowgirls’ middle blocker Erin Kirby.

“They just made a key play here or there,” said Chad Callihan, Wyoming’s head coach.  “I thought they were just a little more disciplined than us in a couple areas. We had a couple defensive breakdowns.”

CSU held Wyoming to 40 kills spread among six players during the night. Kirby led the Cowgirls hitting .412 and eight kills. Wyoming did not have one player in double-digit numbers.

“I think we pressed over earlier was our big key tonight,” CSU middle blocker Samantha Peters said. “We’re getting there with our feet. We have been doing some of this stuff right earlier in the season, but this week we really focused on closing up the block, pressing; and I think we all zeroed in on that tonight.”

CSU not only closed in on its blocking fundamentals, the offense continued to raise the bar. With Culbert, Peters, Reynolds and Snider hitting double digit kills, the Rams continue to be a team others struggle to block.

Wyoming continuously gave up points on missed blocks. When all seemed to be heading the Cowgirls’ way, the Rams put the kill on and reversed the momentum.

After an injury in last week’s practice, Michelle Lawrence stepped back onto the court in the second frame and prepared to make up for lost time.

“I think it’s really our competitiveness that comes out because it is close,”setter Deedra Foss said. “We do make the right plays at the right time, we are competitive so we are gonna do what it takes to win those games.”

The Rams will face the Cowgirls once more this season. For the second Border War of 2013, CSU will travel to Laramie for a chance to continue its five-game winning streak against Wyoming.

“We’re going to play a lot of conference matches like that,” Hilbert said. “Those guys are going to be tough in Laramie.”