CSU volleyball sweeps its way to 8-0 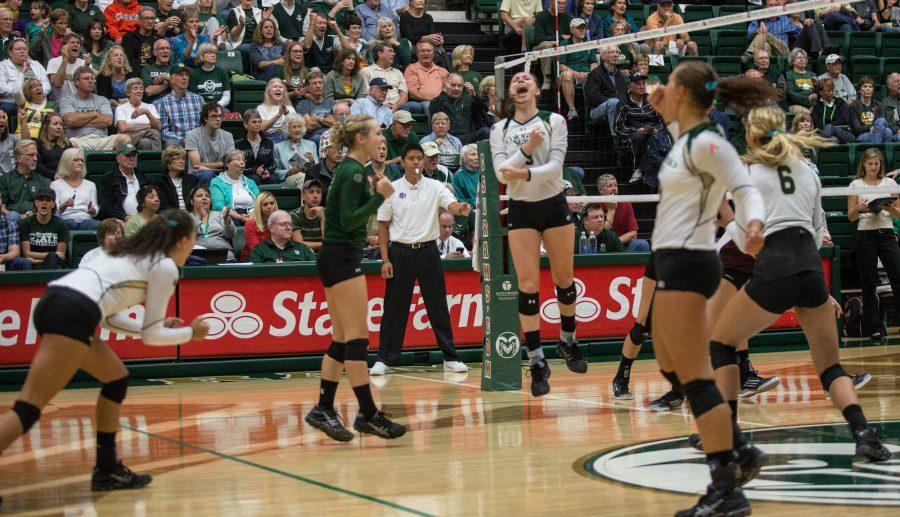 In almost every conversation about the Colorado State volleyball team prior to opening night, rumors about a rebuilding season continued to emerge. The only emerge thus far this season has been the offensive maturity in CSU that continues to send teams packing.

The Rams call their drive “Moby Magic.” A rare connection between each serve, pass and spike, this team is a Cinderella story looking for their happy ending in the Mountain West conference.

According to head coach Tom Hilbert, Wednesday night’s match against Missouri State was one of the cleanest he has seen here at CSU. Because of the motivational drive there on, the Rams remain undefeated in a three set sweep against the Bears (25-21,25-17,25-19).

“There is some Moby Magic, everyone always talks about it,” senior Samantha Peters said. “This team has been really good at bringing our own energy. So even though we have dropped sets, obviously we havn’t dropped a match yet, that is because this team works so well to support each other.”

In Wednesday night’s matchup, sophomore Dri Culbert earned herself the nickname, “Killbert.” Unstoppable on the outside, she had a hitting percentage of .542, with 14 kills and seven digs.

“Dri Culbert has been exceptional,” Hilbert said. “This is a great volleyball player all around, she has improved herself physically so now her ability to play the game is getting more kills.”

On Tuesday, Culbert led CSU with 23 kills in the Rams’ victory over Denver University. The process for CSU is not only winning games, it’s dominating opponents all across the nation.

The closest set between CSU and Missouri State was in the first frame. With a set victory by four points, the Rams never let the Bears back in. Peters made her presence known after Hilbert’s decision to not play her against DU on Tuesday, coming in fired up hitting .333 on 9 kills.

A force on the outside against the Bears was freshman Kaila Thomas. With eight kills in the third game, Thomas stood tall as she repeatedly fired down the line.

“This team is on a roll,” Hilbert said. “And we got two tough matches next week against two great teams, Wyoming and Texas A&M.”

Hilbert is very pleased and proud of where his team is at. The Rams return to practice tomorrow where they will continue to improve on the block.

“It’s gonna be nice for our bodies to get a rest,” Culert said. “I think we played really well as a team, we can only keep improving.”

Still trying not to get ahead of themselves, the Rams started a winning streak at home two weeks ago and there is no sign of them ending it without a fight.

“If the season ended right now, this might be the most clean we’ve played ever,” Hilbert said. “This young team is all of a sudden turning into a pretty good volleyball team.”