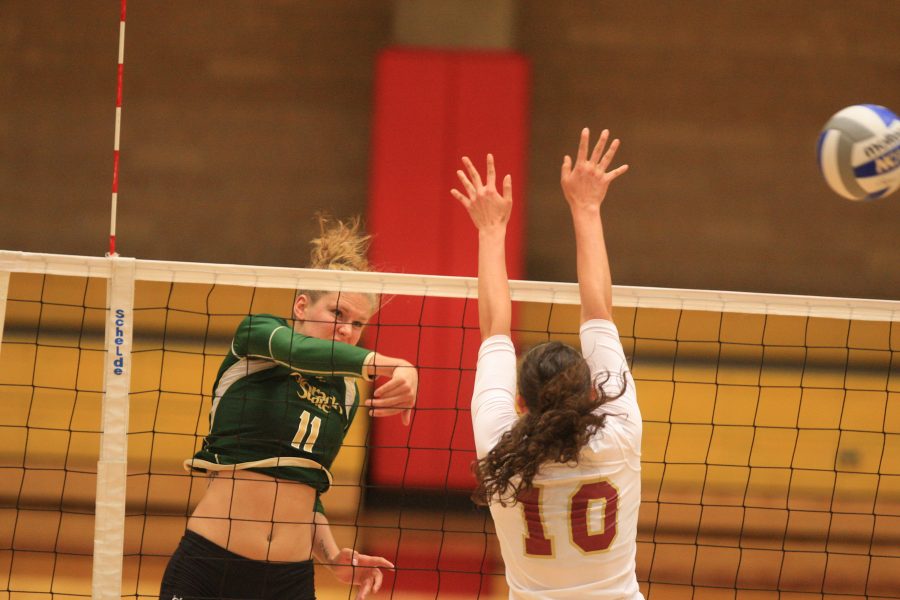 Freshman Acacia Andrews sends the ball over the net in CSU's seventh win of the season. The Rams beat the DU Pioneers in three sets to one in the game at Denver tonight.

Despite two missing pieces in its starting line-up, the Colorado State volleyball team fought to victory against the University of Denver.

On Tuesday, CSU traveled south to Denver where they looked to continue their winning streak against DU. Both putting up hitting percentages above .300 per game; the Rams knew it was a test between Colorado’s best.

With two players out, Samantha Peters on the middle block and Michelle Lawrence on the outside, CSU needed to fill big shoes fast.

DU never let up on the Rams. No matter the placement of the ball, whether they were diving into the benches or across the floor, it seemed like DU was always in the right place at the right time.

“Denver is an extremely scrappy team,” sophomore Jamie Collaizi said. “And I know sometimes it’s hard when you feel like you can’t get a kill on somebody. We’ve known from the start we’re not gonna be a first swing kill team and we just need to play through the rallies.”

“Considering the fact that we are two starters down, I thought this was a great performance,” Tom Hilbert said. “Denver played very well in the first set. I felt like we did not block and defend, they had 21 kills, you don’t beat a team with 21 kills.”

Tables turned on DU as set two looked to be a fresh start for the Rams. In a 4-1 lead from the start, CSU took control of the net with support from sophomore Adrianna Culbert and freshman Acacia Andrews.

“We just told our team we need to block the ball better and serve the ball tougher,” Hilbert said. “And if we do those two things, we can assert our physicality more.”

A presence in the front row, back row and on the serving line, Culbert continued to push the team forward. When she calls for the ball in the back row, the spike that results is a line drive onto the opposite court.

“In the second game, we just started to compete point for point,” Culbert said. “I think it clicked in the second match when I got fired up, I just kept going.”

Culbert ended the night hitting .512, Andrews also put up marks with her 10 kills and .500 hitting percentage.

The win against DU came from a collaboration from pressure on the net and adjustments blocking.  This Rams continues to show promise and dedication towards a fifth straight Mountain West title.

“I’ve got to hand it to Dri Culbert because (she) was unbelievable tonight,” Hilbert said. “She just took the team on her shoulders and she is a great player, a great competitor. I’m so happy to have her on this team.”