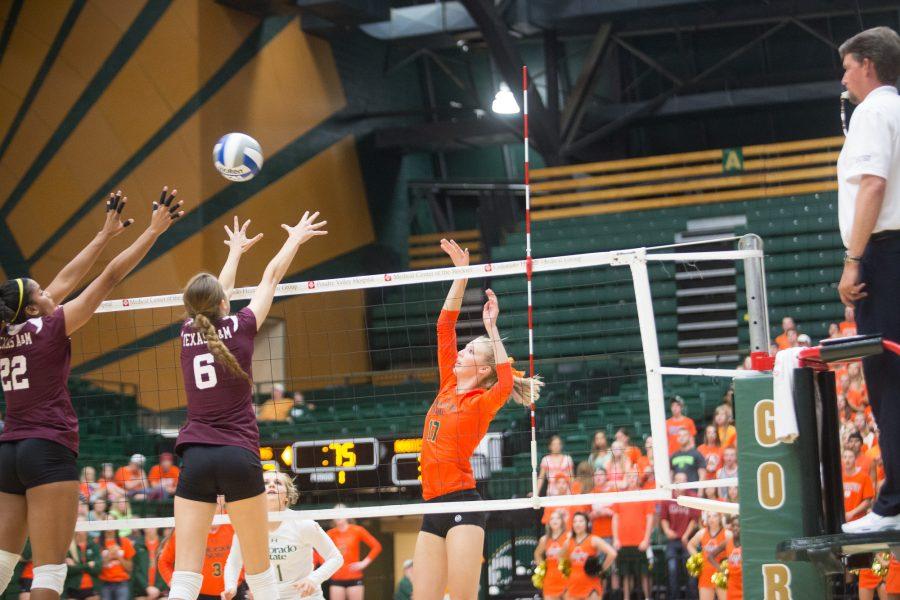 Saturday proved to be one of the biggest wins of the season thus far for the Rams.

“It was really a well played match from our perspective,” head coach Tom Hilbert said. “We missed two serves the entire match. We hit below 14 percent total error (block and error combined), and we had some great performances.”

In Saturday’s match, CSU finished non-conference play undefeated at 9-0, increasing its overall record to 10-0. This is the second time in program history that the Rams had a perfect record outside of the Mountain West.

The last perfect record in non-conference play came in1999 when the team went 13-0.

From point one in the first set to the last point in the third set, the Rams came out swinging and digging their way to victory.

Setter Deedra Foss has been able to maintain a versatile offense, focusing in on target players. This season has been difficult for opponents to block, with options not only on the outside and middle, CSU has taken advantage of the block row.

“We were really centered in on their setter, we wanted to stop her early and we did. It made them switch up their offense which was great,” middle blocker Samantha Peters said. “We have been focusing on blocking a lot, and I think we improved even more tonight. It’s something we’re gonna have to work on for the rest of the season, it’s nice to see that some of that focus is paying off.”

Michelle Lawrence and Marlee Reynolds controlled the outside against Texas A&M with nine kills each. Peters and Kelsey Snider had seven kills and a total of 10 blocks.

“I thought we prepared very well for this team,” Hilbert said. “I thought this was one of the best blocking matches that we’ve had.”

CSU stood strong on defense. Continuing to make plays in two back-and-forth matches, the Rams held the Aggies to a .061 hitting percentage and just 28 kills. Allie Sawatzky and Mariah Agre each hit in the negatives against CSU.

Texas A&M recently defeated then No.16 Florida State and fell to No.7 Michigan in five sets.

“That is an athletic team in the SEC, and I thought physically we were better than them,” Hilbert said

All-around player Adrianna Culbert had a career high with 17 digs in three sets. Culbert contributed seven kills on the outside and four assists.

The Rams are 6-0 in Moby Arena and have yet to lose a set at home this season. With a strong win for CSU, the focus is targeted towards the MW and those better known opponents.

In every close set CSU has played, it has won in the end.

“This team right here continues to amaze me,” Hilbert said. “The maturity with which they are playing right now considering the experience level of this team, it is pretty impressive.”