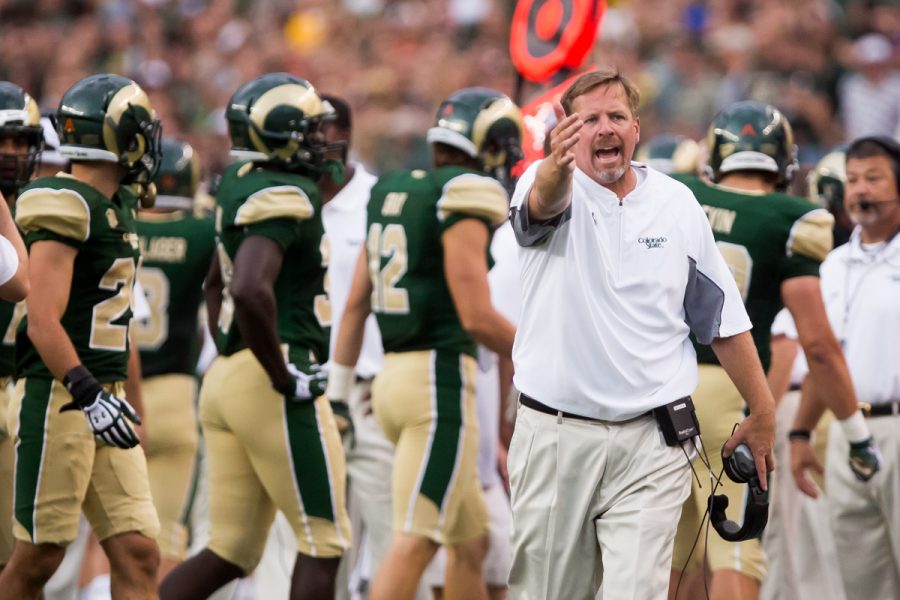 With only one game, CU-Boulder matched its number of wins from the entire 2012 season, after bringing down CSU 41-27 in the 2013 Rocky Mountain Showdown.

The Buffs were able to beat the Rams with explosive plays from junior wide receiver Paul Richardson and their ability to capitalize on the Rams’ mistakes.

“I’m just excited for our seniors to start the season off like this with a great rivalry game,” MacIntyre said. “It was a back and forth game, what a great game.”

MacIntyre praised his team for making big plays when they needed to and also credited CSU for never giving up in the game.

“(CSU) just kept fighting and playing through it,” he said. “I was really impressed with what they did, their resilience, that’s the first time I’ve been on the field with them and they definitely could have let their heads down and not fought but they fought tremndously.”

In only his second career start, quarterback Connor Wood marched the Buffalo offense down the field, finishing the game with 400 yards and three touchdowns, without throwing an interception.

“He played like a grown man,” said Richardson. “I couldn’t even tell you how proud I am of him.”

Richardson, who was forced to sit out all of last season because of a torn ACL, was a weapon CSU could not contain. He finished the game with ten catches for 208 yards including an 82-yard touchdown run on CU’s first possession of the game to put the Buffs ahead of the Rams, 7-0.

After a quarterback battle that lasted until game day, CSU quarterback Garrett Grayson was picked to lead the Rams. McElwain said his decision to play Grayson over Connor Smith and freshman Nick Stevens was based on hiss preparation for the game.

“I think he was ready, I’m not putting this loss on Garrett by any stretch of the imagination,” McElwain said.

The Rams receivers struggled to catch the ball throughout the game. The offense converted only two of their 14 third down situations.

“Offensively we didn’t do a very good job of keeping our defense off the field (by) sustaining drives,” McElwain said.

CU added to its lead after a 17-yard touchdown pass from Wood to receiver D.D. Goodson, making the score 17-3 Buffs with 3:56 left in the first half.

The Rams completed their first third-down conversion on their final drive of the half after previously going 0-for-6. With less than two minutes to go in the half, CSU running back Kapri Bibbs ran the ball for 7 yards and the score to give the Rams their first touchdown of the game and Bibbs’ first touchdown of his career as a Ram.

Coming out of the half, CSU seemed to have found a second wind. Big plays by the special teams kept CSU in the game during the third quarter.

After going three and out on their first possession to start the second half, CU punted the ball to CSU punt returner Joe Hansley who returned the ball 74 yards for the touchdown.

After CU was forced to settle for a field goal, CSU punt returner Thomas Coffman got in on the action and returned the punt 84 yards . Moments later, Bibbs scored his second touchdown of the game giving CSU its first lead, 24-23. Bibbs was given more carries after running back Donnell Alexander went down in the first half with an upper body injury, said to be a hand injury after the game.

In the fourth quarter, though, Bibbs made a costly mistake when he fumbled the ball which was recovered by CU and returned for the touchdown, giving CU a 31-26 lead and momentum back in favor of the Buffs.

The Rams would not lead again in the game.

A 75-yard pitch and catch from Wood to Richardson gave CU a 41-27 lead over the Rams after the successful extra point and the icing on the cake.

CU will take the Centennial Cup and year-long bragging rights back to Boulder after the Rams earned both in a win over the Buffs a year ago. CSU hasn’t had back-to-back wins over CU since the 1999 and 2000 seasons.

Football Beat Reporter Katie O’Keefe can be reached at sports@collegian.com