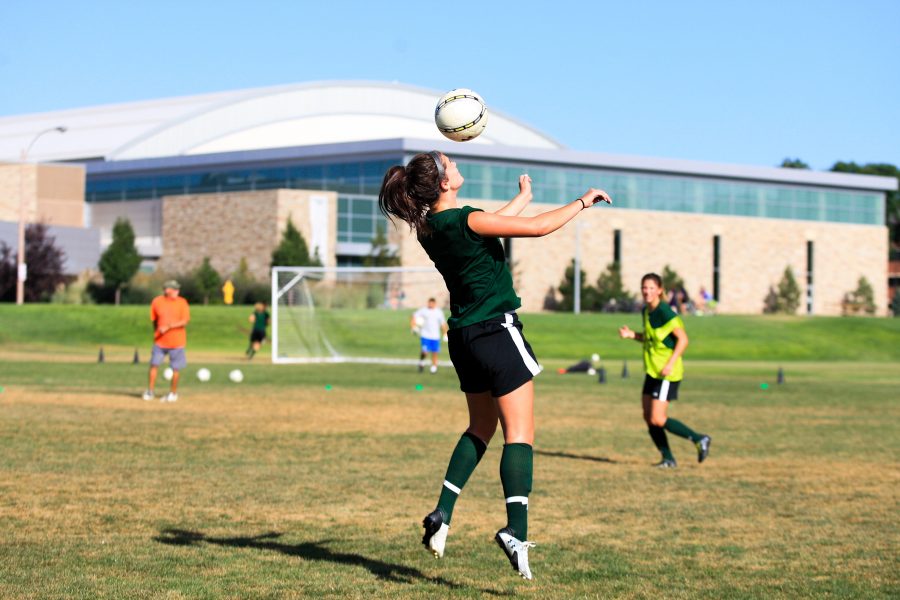 Sophomore forward Erika Bratschun heads the ball at practice on Tuesday. The Rams are gearing up for their first game this Friday.

September 6th, 2013 will go in the history books for Colorado State women’s soccer.

For the inaugural Rams, tonight marks their first ever home match as a Division I program. After beginning the season with three consecutive games in the state of Texas, the Rams kick off their home opener at 5 pm at the Fort Collins Soccer Complex.

CSU will look for their first Division I home win against Grand Canyon University.

The Antelopes are also in their first season as a Division I program and currently sit at 0-3 after failing to score in their first three matches against St. Mary’s (CA), Valparaiso, and IUPUI.

The Rams come into their inaugural home match at 1-2 after beating Division II Lubbock Christian 3-0 for their first win. The Rams then fell to No. 24 Texas Tech 6-0 and returned to Texas a week later and fell to Southern Methodist 4-0.

The Antelopes have yet to score in the regular season, but are led in shots by junior forwards Jessica Fitzgerald and Jessica Lincoln with five shots for Fitzgerald and four for Lincoln, respectively. Senior goalkeeper Catherine Lena has logged more than 270 minutes in goal while making nine saves, and giving up six goals.

Stevie Gill is in his fifth year as the head coach of the Antelopes, leading them to

44-40-9 mark since taking over in 2008. Gill had guided the GCU to three consecutive winning seasons as a Division II program, compiling a 29-18-6 record in that time.

CSU has been led this year in scoring this season by forwards Erika Bratschun, Sasha Pchenitchnikova, and Carly Seib with one goal each. Bratschun leads the Rams with eight shots, with Pchenitchnikova right behind at six.

Junior transfers Jami Vaughn (Kansas) and Megan Speed (Northern Colorado) lead an experienced back line for the Rams in front of goalkeeper Elena Eidson. The freshman has tallied more than 210 minutes in net for the Rams while junior Maggie Sherman has logged almost 60 minutes as Eidson’s backup. The two have combined for 17 saves while giving up ten goals in three matches.

Bill Hempen is in his first season leading the Rams. Hempen ranks 17th all-time in Division I history for wins compiling a 276-188-44 record in twenty-four seasons as a head coach. Hempen counts ten All-Americans and six professional footballers amongst his former players.

As the architect of the Duke University Women’s program, Hempen led the Blue Devils to 160+ wins over thirteen seasons and a national championship appearance in the program’s fifth season. Hempen has also served as a scout and player development coach for US Soccer since 2011.

CSU soccer continues to build together