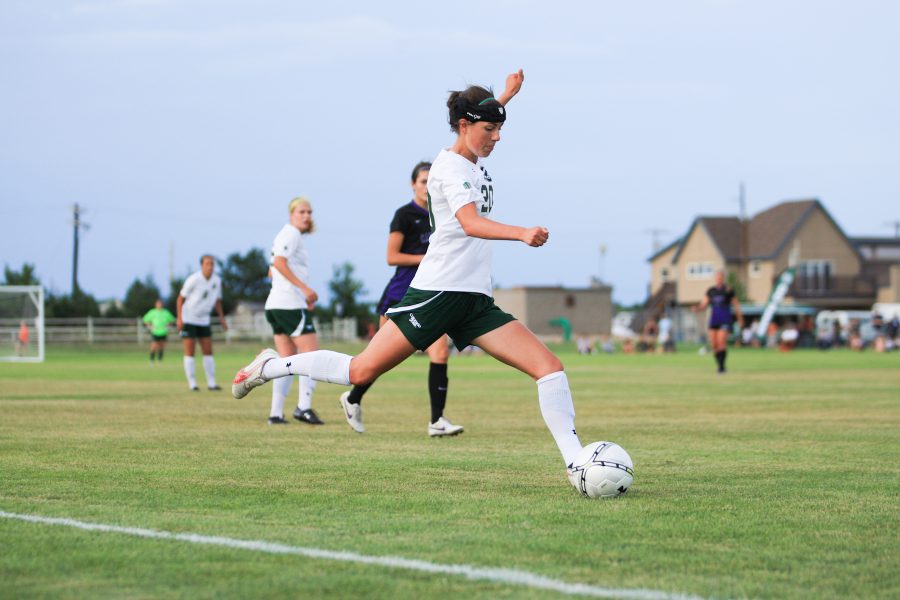 The Rams lost to Grand Canyon with a score of 0-1. The Rams had hoped for a win in their first season game this Friday afternoon.

If there’s one thing the CSU women’s soccer showed the 1,000 fans who showed up at Ram Field on Friday night, it’s that they will play an aggressive, physical brand of soccer.

In a match that featured 14 fouls and two yellow cards, the Rams scrapped for ninety minutes and came up with a few late goal-scoring opportunities but ultimately fell to Grand Canyon University 1-0 in their inaugural homecoming game.

GCU sophomore forward Cassie Beckwith’s goal in the 50th minute was the difference in the match after a scoreless first half. The Rams outshot the ‘Lopes 12-5 for the game, but just couldn’t find the back of the net on their scoring opportunities.

Junior defender Catherine Ruder had the best chance for the Rams on a breakaway in the 84th minute but her chip shot sailed just over the crossbar and out of play. Forwards Sasha Pchenitchnikova and Jessica Jochheim each had chances in the 82nd minute but were unable to come up with goals.

Although Coach Bill Hempen was disappointed with the end result, he praised his young Rams squad for stepping up in the second half and giving themselves a chance to tie late in the match.

“They could have quit, they could have stopped playing. I had a fairy-tale ending in my mind, but it didn’t work out that way,” Hempen said.

Players and coaches alike were surprised to see such a great turnout for the first home match in program history. The large crowd was engaged the whole way, on the edge of exploding after each of the Rams scoring opportunities.

“It really helped us and gave us momentum, they showed us a lot of support,” junior defender Jami Vaughn said.

Fans came to see a quality soccer match and that’s exactly what they got. Though it  wasn’t the storybook end result they had hoped for in their inaugural home match, this young Rams squad showed they are here to stay.

“You see all these fans, ladies? They didn’t come here to see me,” Hempen said to his team at halftime. “Let’s give them a show.”