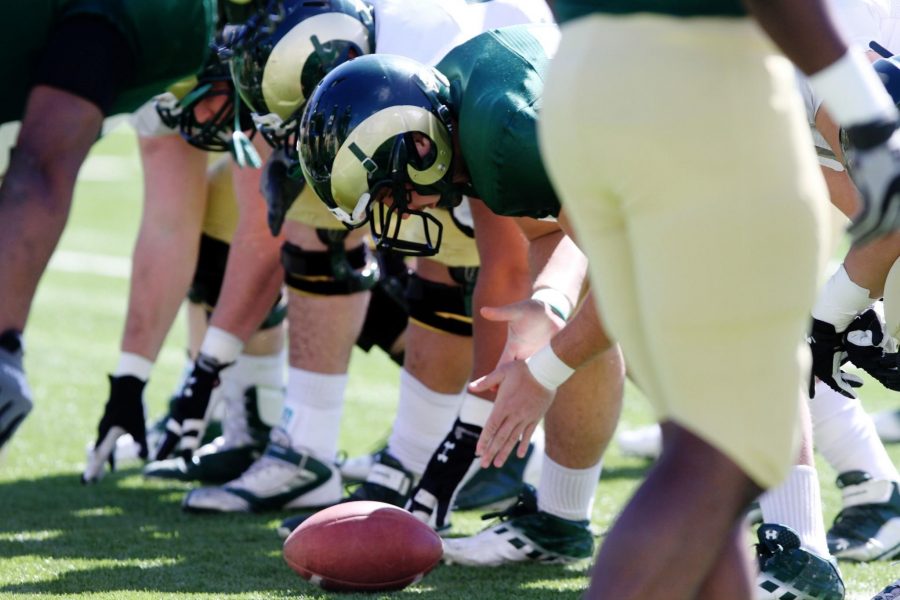 Junior Mason Hathaway prepares to run some offense drills Sunday afternoon in Huges Stadium. The spring season of football has officaly started, and all the players are feeling fresh and ready to get back into the game.

For the first time this season, the Rams did not relinquish a fourth quarter lead.

This time, they were able to not only hold onto the lead, but add to it with a strong offensive performance led by quarterback Garrett Grayson in a 34-17 win over Cal Poly on Saturday at Hughes Stadium. Grayson tied his career best with 297 yards on 21-of-30 passing and two touchdowns.

“I thought Garrett played a good game and that’s what we expect from him,” head coach Jim McElwain said. “Not anything spectacular, but he took care of the ball.”

The offensive line continued to be one of the strongest units on the field for CSU. For the first time in his career behind center for the Rams, Grayson was not sacked. Anchored by center Weston Richburg, the offensive line provided the space for running back Chris Nwoke to amass his sixth 100 -yard game as a Ram. He finished the day with 133 yards on 19 carries.

“We just did our jobs, we didn’t do anything special,” Nwoke said. “We just took advantage of the great holes our offensive line provided.”

After having only five catches among them for the first two games of the season, CSU’s tight end duo of Kivon Cartwright and Crockett Gillmore were utilized more as receivers than blockers on Saturday. They took advantage of the opportunity and Gillmore finished with a combined ten catches for 136 yards and one touchdown from Cartwright.

On the first possession of the game, CSU drove down the field for 75 yards in 2:33. Running back Donnell Alexander capped off the drive with a six yard touchdown run.

Cal Poly also scored on its first possession of the game with a 46-yard field goal by kicker Bobby Zalud. The drive was aided by two CSU penalties on defensive lineman Calvin Tonga.

On their next drive, Grayson hit wide receiver Thomas Coffman, who was playing for the injured Charles Lovett, for a 46-yard gain. The Rams (1-2) added to their lead on a field goal by kicker Jared Roberts, his 11th consecutive made field goal.

The Mustangs (1-2) posted their first touchdown of the game on a 34- yard touchdown run by fullback Akaninyene Umoh that ended a 38 second drive for the Mustangs.

The Rams scored on each of their first five possessions of the game and went into the half with a 27-10 lead.

In the third quarter, though, the Rams offense stalled. Cal Poly held the Rams without a point in the third, while adding to their own score to make the game 27-17.

The Mustangs came close to cutting the Rams lead to seven in the final quarter, but Shaquil Barrett blocked his second field goal of the day and the ball was recovered by DeAndre Elliot on the Rams 32-yard line.

The Rams then drove down the field and secured the win on a touchdown pass from quarterback Garrett Grayson to tight end Kivon Cartwright with four minutes left in the game.

“The first drive gave us the momentum and gave us the confidence to show what we can do,” Grayson said. “But the one in the fourth quarter, we were all tired, but when you can battle through that and show what you’re made of, that’s huge going into next week’s game.”

With their first victory of the season, the Rams will head to Alabama on Saturday to take on the nation’s top team and two-time defending national champions, the Crimson Tide.