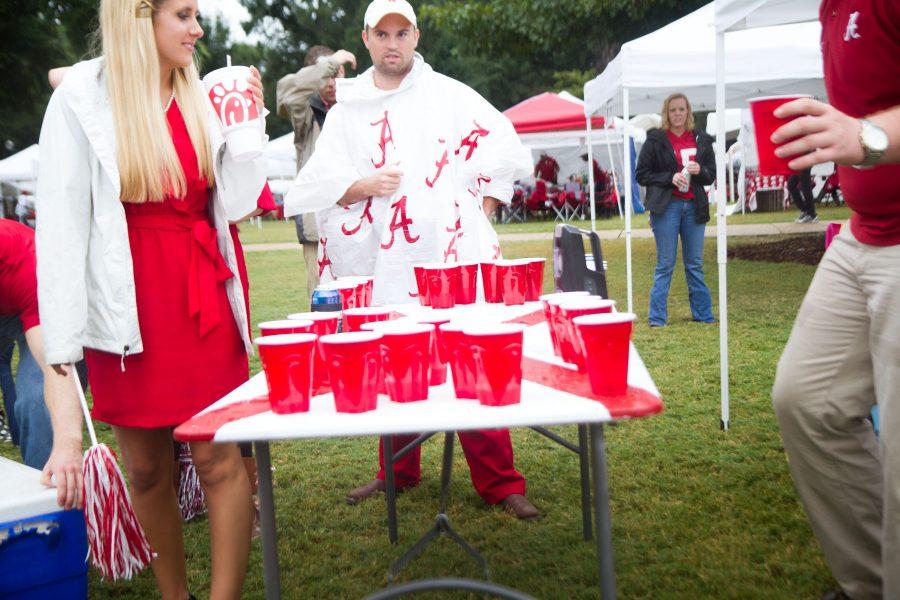 CSU and Alabama fans tailgate in the Quad next to Bryant-Denny Stadium in Tuscaloosa, Alabama. Some tailgaters showed up as early as 7 A.M. to start their football-filled day.

TUSCALOOSA, Ala. — The rain couldn’t stop the Crimson Tide fans from tailgating. It may have stalled the party for a little while, but tailgating is what they know and something they do better than most.

Satellite dishes and flat screen televisions decorated the quad five hours before game time as Alabama fans prepared for their first home game of the season. Ten months without a  football game can seem like a long time for Tide fans, especially when football is more of a religion than a sport in Tuscaloosa.

“Eight weekends out of the fall, this is what we do,” said Bud Kitchin, mayor of the city of Lincoln in Alabama and a member of the Triangle Tailgaters, a group that has been tailgating in the same spot on every game day for the past nine years. “We’re champions being champions out in the rain.”

Kitchin, an alumnus of the University of Alabama, began tailgating in his favorite spot when his youngest daughter started going to school at Alabama. Kitchin estimated that the quad was about  30-percent full, but he excepted it to grow within the hour, nearly four hours before kickoff at Bryant-Denny Stadium.

The Triangle Tailgaters, decked out in crimson red, also invited a little green to the party. The Tide fans were quick to offer their CSU guests, alumni from Denver that flew out the day before for the game; corndogs, snacks and a tent to shelter themselves from the rain for a little while.

“We love guys from like CSU or LSU,” said Braxton Vincent, a member who used to live in Colorado. “We’ve even had some Auburn fans.”

Vincent moved back to Alabama ten years ago after living in Colorado. Both of his daughters graduated  from Liberty High School in Colorado Springs, but Alabama is his home and the Crimson Tide will always be his team. Both Braxton and Kitchin said all ‘outsiders’ are welcome to tailgate with them.

“We don’t like them as much when they win,” Kitchin said.

Sean Mulligan, a sophomore at Alabama, also chose to weather the storm and began tailgating early with his friends. As someone who is originally from Seattle, the rain doesn’t bother him too much.

Mulligan moved to Alabama about four years ago with his family.

“The is the first home game we’ve had and usually it would be packed,” Mulligan said. “Everyone here is afraid of the rain. Give it about two hours before game time and it will be packed.”