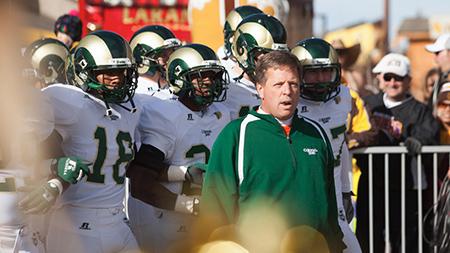 Head Coach Jim McElwain leads the team onto the field at the Wyoming game this past Saturday. The Rams will play UNLV this Saturday at 5 p.m. at Hughes Stadium.

There’s success at the end of the tunnel. Underneath the pungent scent of their blood and sweat, the CSU football team can smell it. Battling through the bumps, bruises, muscle aches and heat of Fall camp, they are ready for the season to start.

Monday kicked off the last week of camp, where the focus is starting well and finishing better. That isn’t the easiest goal to accomplish after a summer’s worth of grueling work starts to make itself known. The leaders of the team have taken it upon themselves to keep their players motivated.

“You just got to let them know that everyone is going through the same thing,” senior linebacker Shaq Barrett said. “The guys on offense, their legs are tired too, so that’s no excuse for us. There’s no reason for them to beat you on every play.”

Those guys on the opposite side of the ball were feeling the same way. Senior center, Weston Richburg decided to step up his game, to help the younger guys, but also to prove to his coach that he should be in charge of the first snap.

“Last year I wasn’t doing what I needed to do to help this team,” Richburg says. “I’ve learned, during these practices that you have to be positive whenever you face adversity, I’ve learned to handle these situations better, as well as help other guys along.”.

Coach Jim McElwain has taken note of Richburg’s progress, and though the official depth chart won’t be set in stone at least until after Tuesday’s scrimmage, Richburg’s was one of the few names Mac named as potential starters.

Three other names of importance mentioned by McElwain; Garrett Grayson, Conner Smith and Nick Stevens. Only one of whom will walk onto Sports Authority Field as the starting QB on September 1. Whoever it is must be vocal, turnover-retardant and a strong leader.

“Last spring he (McElwain) said ‘you know, our quarterbacks need top pick that part up,’” Grayson said of vocality. “I tried to go talk to guys one-on-one and kind of build those relationships. That way, when I’m out on the field and I’m trying to coach them up they’re not taking it like I’m yelling at them.”

As Grayson, who some see as the front-runner, and Richburg both came to realize, McElwain respects and rewards the players that take his advice, and run with it. Hard.

Perseverance and teamwork are two of many magical beans in McElwain’s goody bag of success that he preaches to the boys. Literally preaches.

On Sunday, he brought out the team bus to take the Rams to Sunday Service together, and then brunch – a good-will wish for senior D-lineman, Eli Edwards, whose daughter was born Monday.

“I was thinking to myself, what if she goes into labor on the bus or in church? What would I do?” Richburg said smiling. “He’s an awesome guy, and he’s going to be an awesome dad.”

While Edwards will get the day to spend with the newest edition to his family, the rest of his teammates are bringing their A-game to Tuesday’s scrimmage at Hughes Stadium.

“Please help us welcome the newest Ram into the family. Congratulations to Eli Edwards and his wife Luisa on the birth of their daughter! #1TTD,” tweeted a proud McElwain.