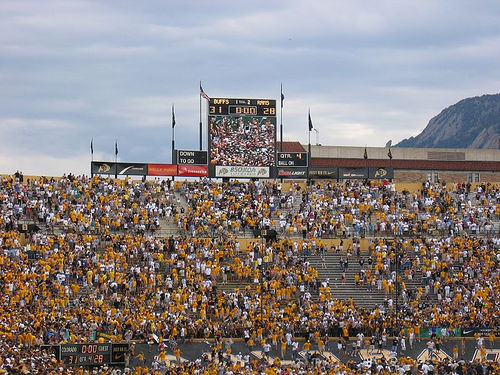 Less than one week remains until the biggest college football game in the state of Colorado and as of Friday, around 43,661 tickets had been sold for a game in which the venue has  a capacity to seat 76,125 fans.

CSU is set to kickoff the regular season against in-state rival CU-Boulder for the annual Rocky Mountain Showdown at Sports Authority Field at Mile High on Sunday, Sept. 1 at 4 p.m.

Last year CSU won the centennial cup with a 22-17 victory over the Buffaloes—a win that about 18,000 Rams fans witnessed at the stadium in Denver.

More than 17,000 tickets of CSU’s 30,000 allotment has been purchased according to Jason Layton, senior associate athletic director for sales and marketing at CSU.

More than 56 percent of the 39,000 tickets given to CU had been sold as of Friday according to David Plati, sports information director at CU. More than 3,000 are student tickets.

“It just seems ticket sales are a little slower than usual, not going along as we had hoped,” Plati said. “Usually the week of the game things do pick up, people kind of turn their attention to football and kind of get with it.”

While CSU is far from selling out, Rams fans have already exceeded last year’s student ticket sales. Of the 17,000 sold, students had purchased slightly more than 4,800 tickets. Layton said the university is on-pace to exceed last year’s total ticket sales from CSU.

“We’ll have to see how next week goes,” Layton said. “But it’s looking good so far.”

While most of the weight falls on the two universities to promote the game and sell tickets, Visit Denver, an organization responsible for marketing metro Denver, and Sports Authority Field are also involved in the process, according to Matt Biggers, associate athletic director of external affairs and chief marketing officer at CU.

CU’s marketing strategy for the game is similar to previous years’, according to Biggers. He said that pushing ticket sales and continuing to be as aggressive as possible to promote the game and drive sales is something they try to do every year.

“I think we have a long way to go to sell out but from our standpoint our sales are very similar to what they were last year,” Biggers said.

Both football programs have experienced trouble on the field since the days of selling out the Showdown. Last year CSU finished the season at 4-8, an improvement from the three previous three win seasons. CU finished at 1-11, and subsequently fired former head coach Jon Embree and hired Mike MacIntyre in Dec. 2012.

Rams head coach Jim McElwain said it is up to both programs to get fans in the seats.

“When you’re in a market that has all your major sports, you’re battling for sections (in) the paper, you’re battling for relevance but that’s what’s great being here, we have all of those,” McElwain said. “Now what we need to do is step forward and make this something that is truly an event that people want to go see.”

Student tickets can be purchased for $20 each plus a $3 processing fee online at csurams.com until Thursday while supply lasts. Tickets are also available at the McGraw Athletics Center ticket office.