The Rocky Mountain Collegian • May 3, 2013 • https://collegian.com/articles/sports/2013/05/csu-volleyballs-kelsey-snider-stays-in-shape-while-doing-the-high-jump/ 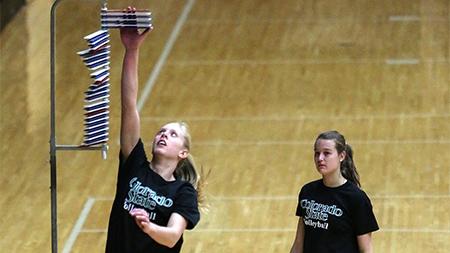 Outside hitter Kelsey Snider practices her jumping at practice. The Rams have a big weekend at home starting tonight against Boise State, followed by Air Force on Friday.

Over the years, the NCAA has developed rules for the amount of practice time coaches can spend with their players during the offseason. The rules are designed to allow student athletes the opportunity to rest and focus on their schoolwork.

Snider has joined the track and field team at CSU in order to compete in the high jump and keep herself in shape for volleyball season.

“I’ve learned how to jump off one leg and how to explode, like vertically, which will help on the slides and just anything behind the setter for volleyball mostly,” Snider said.

Though Snider has focused her college career on becoming a better volleyball player, she has a history of competing in track and field.

She earned two varsity letters for track and field while going to Pomona High School in Arvada, Colo. but was forced to give it up after her sophomore year when she started to play club volleyball.

“I knew that she was good at track. In her sophomore year and freshman year (in high school) she was really good at track in her age group stuff, that’s one of the reasons that we started looking at her,” CSU volleyball coach Tom Hilbert said.

“Then she came to me and said ‘I’d like to try it,’ and I thought it was a good idea because I’ve always had a really good relationship with (track coach Brian) Bedard and he’s smart enough to know that if he has a chance to get an athlete like this for no money, he’s gonna work around our schedule.”

Bedard worked with Snider’s volleyball schedule last week as she did not participate in the Jack Christensen Invitational at CSU due to the volleyball team’s spring training schedule, which concluded on Wednesday.

While working around two sports’ schedules, Snider was faced with the physical challenge of an increased conditioning program for volleyball that Hilbert has called “the most physically demanding” spring program he has had during his time at CSU, while also practicing with the track team in the afternoons.

“It felt like I was having three-a-days,” Snider said. “I would have lifting or conditioning in the morning and then I would have individuals and then later in the afternoon I would have track practice.”

The dedication that Snider has shown throughout the offseason has been appreciated by Hilbert, especially as Snider may make the move from outside hitter to middle blocker to replace departing seniors Megan Plourde and Breion Paige next fall.

“I think what it says is she is a person who has always dedicated herself to sports and to developing her talents, whatever it may be,” Hilbert said.

“And I’ve never had an issue with how hard she works, sometimes I almost want her to back down a little bit. She works very hard, she’s very serious and I think this is just a natural thing for her, if she feels like she could be good in something, she’s gonna try to pursue it.”

Now Snider will just have track practices until volleyball practices begin again in August and the opportunity to become an integral part of a team that has won the last four Mountain West titles awaits.

“I’d like to see more court time than I have in the past,” Snider said. “Obviously, all-conference would be nice too, but I think I’m gonna just play it by ear and play my game.”