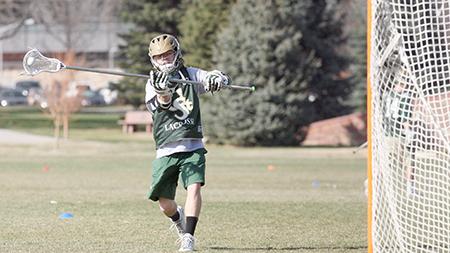 CSU Lacrosse will be looking to defend their RMLC title in a championship rematch against BYU Friday.

The Rams hit the road for the last time in the regular season for a pair of division games against BYU and Utah.

After showing their tenacity with an impressive comeback win in triple overtime against No. 5 Chapman March 25, the Rams have had a long break between games.

“Sometimes it’s tough to keep that mental edge when you don’t have the games, but I thought this week was great and I think practice went pretty well,” CSU coach Alex Smith said.

Friday’s game against BYU will be another marquee matchup, and a rematch of last year’s Rocky Mountain Lacrosse Conference Championship. The Rams won that game 14-7 with the help of senior Austin Fischer’s four goals and junior goalie Koltin Fatzinger’s four saves.

The Cougars are a physical team that will try to fluster the Rams with their gritty play.

“They like to get teams out of their element, get the ball on the ground, and push the other team around,” said Fischer.

BYU enters the game ranked fourth in the nation with an 11-2 record, while the Rams sit atop the polls at 10-0.

“Its always been a good game and its been split the past couple years,” BYU assistant coach Jordan Harris said. “Coming into it we know CSU is good and we know what they bring so we have been preparing pretty hard all week and to get ready and we are comfortable with our game plan and ready to go.”

BYU will be fired up for another shot against the Rams, who also beat them in the national semifinal on their way to their fifth national championship.

“I think the biggest challenge for us this game is how emotionally ready we get for the game because they are going to be really excited to play us and we need to rise to that challenge,” said Smith.

With CSU being one of the toughest defenses in the nation, BYU will have to capitalize on their chances.

“They’re big and fast, and it brings out lot in us in this game because its such a big rivalry, its so historical, and we’ve played each other so many times in the last few years, so there’s a lot riding on this game,” CSU senior defenseman Tyler Zabor said.

The Rams will end the two game stretch on Saturday against Utah (5-5). Both games will be imperative for the Rams to keep pace in the division with CU-Boulder.

“At this point in the season, it’s about building and getting better every game and every week because our goal is the end,” Zabor said. “What happens along the way just helps us down the road.”

The final road trip of the regular season will be a chance for the Rams to exert themselves as the number one team in the nation and give them a taste of playoff style competition.

“Being on the road is great because you’re all together and you’re all thinking about lacrosse, so it’s a great bonding experience for the team,” Smith said. “This road trip is a great opportunity for our team to get better, and that is something we are looking forward to.”