Megan Plourde’s living it up playing professionally in Croatia 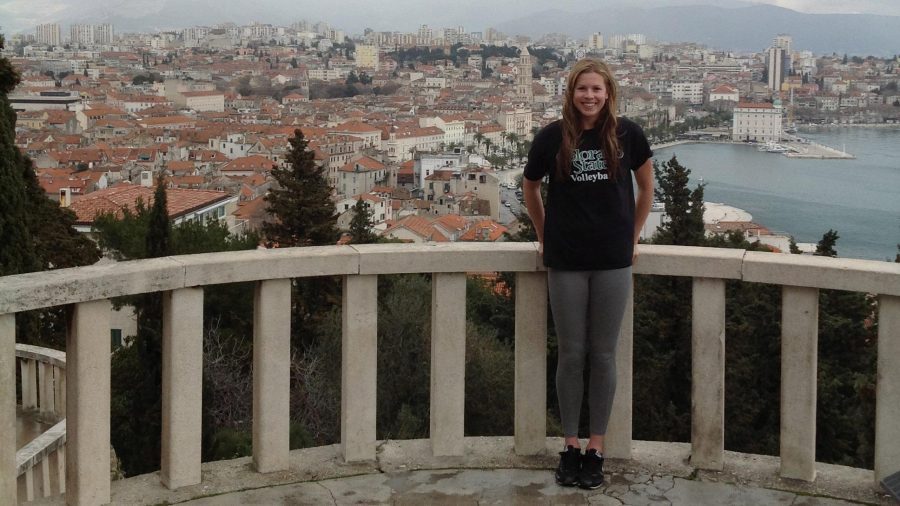 I guarantee you Megan Plourde’s first job out of college will make you jealous.

The former CSU volleyball All-American plays professionally in Croatia for the team Zok 1700, and her life is heading in the right direction.

Plourde graduated from CSU in December with a degree in business administration wanting to play professional volleyball.

Most European professional seasons run from August through May, so Plourde hoped to catch on with a team midseason and finish it out.

She went on a European tour with Bring It Promotions after a tryout in Puerto Rico fell through.

Her agent had been working with the club’s president, who wanted to hire five Americans to help his team close out the season strong.

“It’’s pretty interesting because, there’s two parts of the season,” Plourde said. “The second half is when this president of the club hires foreigners to come play and he just hires them to play for the playoffs.”

Plourde’s been in Split, Croatia since January 30 and seems to be adjusting well to her new life and opportunity.

The team practices twice a day for an hour and a half at a time. The first happens at 10:30 in the morning and the second starts at 9 p.m.

Plourde typically wakes up at 9:30 in the morning, and has a 10 or 15 minute walk or drive to one of the two gyms the team uses for practices. The club provides cars so the team can get to where they need to go.

“The one gym we have is kind of like Moby, but only one side has the bleachers. Usually we play games in there because it’s bigger,” she said. “The other gym is like, ugh, I don’t know how to explain it. It’s like (the Indoor Practice Facility at CSU) actually, but it’s a lot darker and it’s really hot in there and it’s not that great. We don’t practice in that gym that much.”

The practices focus much more on team play and rotations than Plourde’s practices at CSU, which featured position-specific breakout drills and much more intensity from the coaches.

Many of the practices follow the same routine, and put a lot of emphasis on players understanding the game themselves and correcting mistakes.

“(CSU coach) Tom (Hilbert) always told us you need to be your own coach back in college. I think that’s one of the biggest things that I’ve been using since I’ve been here,” Plourde said. “You need to coach yourself and you need to know what you did wrong in a certain hit or certain pass and know how to change it.”

Especially when your coach doesn’t speak your language. Literally.

None of Plourde’s coaches speak English, so her Croatian teammates have to translate everything the coaches say for the five Americans.

That language barrier doesn’t really exist for much of the rest of the country, which is great for Plourde and her teammates because they have a lot of free time to explore and interact.

Right after practice the five American teammates go to a restaurant called Opatija for lunch because the club pays for one free meal per day for its players there.

“We’ve tried all the local Croatian special dishes but now all of usually we just get chicken with like a side dish,” Plourde said. “I’ve tried a bunch of new things but I haven’t found like a new favorite or anything.”

After that it’s a free for all. Maybe they go to the beach. Sometimes they’ll rent bikes. Once it got warm they went swimming.

Even with that variety, coffee is the one constant. Plourde grabs a coffee at one of the cafes on the Riva, which is near the seaside.

“The economy’s really bad here, a lot of people don’t have jobs,” Plourde said. “There’s a ton of cafes and they’re always busy with people just meeting up with a friend or whoever just to have coffee every single day.”

Eventually though 9 p.m. rolls around and it’s time for practice again.

“I definitely just take a short nap during the day sometimes. If I really need to I’ll have a coffee before practice,” Plourde said. “It’s hard to get motivated but we don’t have much choice, it’s what we have to do.”

After the day’s second practice it’s time for sleep, and the adventure starts over again the next day.