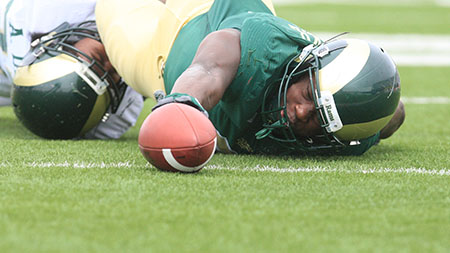 Saturday was the last chance for coach Jim McElwain and his staff to see his team play before the end of the spring.

They liked what they saw.

“We’re a long ways ahead of where we were last year, but we still have a long ways to go,” McElwain said. “As I said, these are guys who are getting it, and who understand what it means to be successful and what it takes.”

The spring game may have been an indication as to who will run the offense for the Rams at the beginning of the season.

Grayson completed 57.1 percent of his passes for 153 yards and two touchdowns, while Smith completed 61.5 percent for 132 yards and one interception.

The spring has provided both quarterbacks with more time to become accustomed to McElwain’s offense and understand how to make the proper reads on opposing defenses.

“It’s definitely been a valuable experience just going through a full spring knowing exactly what I’m doing,” Smith said. “It’s definitely helped, I think I got better and just looking forward to going into summer and working hard to have a good season next year.”

On the first team defense during the scrimmage, it was senior linebacker Shaquil Barrett that stole the show.

Barrett finished the game with six tackles, three of which were sacks of Grayson.

Barrett anchored a defense that recorded a total of five sacks and three quarterback hurries, which the defense has attributed with a better familiarity with the defense.

“The year learning the system, that helped us a lot,” Barrett said. “Just coming out here and playing fast, playing hard, that’s what (it) allows you to do when you know what you’re doing already.”

Though at times he was under pressure, Grayson managed to move the offense effectively for most of the scrimmage while getting the ball out to his play makers.

A maligned group of CSU receivers last season failed to see one player reach the 500 yard receiving mark, but this year the Rams are hopeful that players like redshirt freshman Jordon Vaden will emerge as a game-breaker this season.

Vaden caught six passes for 55 yards and a touchdown in the scrimmage while matching up with first team cornerback Shaq Bell for most of the day Saturday.

“Jordon Vaden he’s gonna be an upcoming, like a prime receiver, he’s gonna be a real good receiver,” Bell said. “He’s got speed, he’s an athlete, he can jump and catch the ball so I mean, our receiving corps is getting better.”

Now Vaden and the rest of the Rams will be charged with getting better individually, as formal team activities have ended for the spring.

“It’s really important what we do in the offseason,” McElwain said. “Throughout spring ball our guys have done a good job of transforming our bodies, and we need to keep that up through Coach (Mike) Kent and all of the strength guys that we have moving forward. We move into the next phase. This was a successful phase, and it’s a great time to be a Ram.”