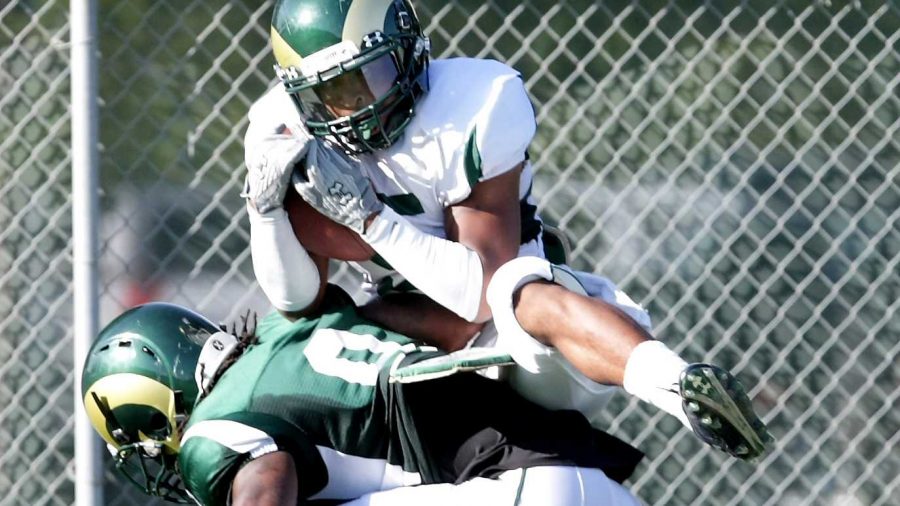 Cornerback Momo Thomas (5) intercepts a ball from Byron Steele (8) at practice in 2010. Thomas signed as an undrafted free agent with the Atlanta Falcons over the weekend.

Tackle Joe Caprioglio, cornerback Momo Thomas and punter Pete Kontodiakos each had their phones ring with invitations to join NFL rookie minicamps later in May.

Caprioglio, a 6-foot-6 315-pound tackle, will join the Arizona Cardinals after starting in 22 games during his career as a Ram.

“I was blessed to even be in the conversation to move on to the next level,” Caprioglio said. “It looks like the Arizona Cardinals are going to give me a shot and to just get in front of them and show them what I can do is just a blessing.”

Thomas started a total of 35 games for the Rams but sustained a season-ending shoulder injury in CSU’s third game of the season last year against San Jose State.

Despite his injury, the Atlanta Falcons decided to give Thomas a chance to join the team this summer.

“I can’t even explain how I feel,” Thomas said. “With my injury and everything I had to go through, I just want to thank the whole program from the athletic director (Jack Graham) to coach (Jim McElwain) and Terry (DeZeeuw) for getting me through the surgeries. Without them I wouldn’t be where I am today.”

Thomas will join a Falcons team that has a glaring need at the cornerback position.

After losing corners Dunta Robinson and Chris Hope to free agency this off-season, the Falcons decided to draft cornerback Desmond Trufant out of Washington in the first round and corner Robert Alford out of Southeastern Louisiana in the second round.

Thomas will add depth to a position of need in Atlanta if he makes the team and will be given the opportunity to compete for playing time this summer.

The one Ram that was long speculated to get a chance to play at the next level was Pete Kontodiakos, who was invited to rookie camp by the Carolina Panthers.

Kontodiakos earned first-team All Mountain West Conference honors this past season as he set a program record for yards per punt at 46.5 yards.

Kontodiakos will be in competition with current Panthers punter Brad Nortman, who averaged 43.0 yards per punt with the team in his rookie year last season.

“It’s a dream come true to even get a shot at this level,” Kontodiakos said. “My family and I are really thankful for an opportunity to do something big.”

CSU saw nine players declare for the NFL draft, none of which were selected, but the opportunity for the three players that received phone calls Saturday night remains the same.

“Drafted or not, if I play well, that’s all that matters in the long run,” Caprioglio said. “So I’m just happy to get a shot and I think Arizona’s a great fit.”

Now Caprioglio, Thomas and Kontodiakos will prepare to travel to their respective rookie minicamps, which will begin May 11, in hopes of making their dreams come true of playing in the NFL next year.