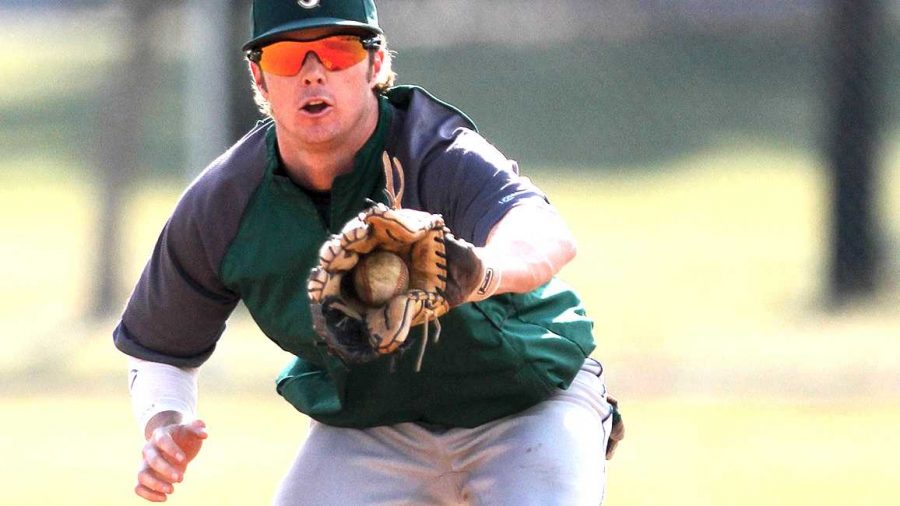 Brian Svetic makes a play at second base at practice. The baseball team will be facing off against University of Northern Colorado in a double header this evening at City Park.

So goes the motto of the CSU baseball team as they prepare to play the UNC Bears, in what will end a 6-day 7-game stint.

The doubleheader, beginning at 4:30 p.m. at City Park, will be the last home games of the season, and for the team’s seniors, forever.

But these games are carrying more than just sentiment. After taking two of three from CU-Boulder over the weekend, a trip to regionals is almost in the glove.

The Rams need only win both games against UNC, and then root for CU to do the same later in the week.

“These games are really big for us,” senior OF Ben Furtner says. “Our main goal is always a national title, and regionals are that next step.”

At the start of the season a national title seemed out of reach, but CSU coach Nick Childs has remained confident in Furtner and his fellow seniors in leading the team to success.

Still, they are only losing six seniors this year, meaning the vast majority of the team came into the season young and still learning the bases.

“It was a crash course for some of them; they had to learn faster than they should have,” Childs said. “But our seniors have been doing a really good job in helping them hit our stride. We are getting a feel for our roles and for college baseball.”

That stride was evident this past weekend, as the Rams tallied a total of 35 runs in three days. The impressive show of bats has given the team the confidence they need to win both games.

Currently, the Bears lead the series 3-2, but the Rams have outscored them 26-22, thanks to solid pitching. Junior pitcher Travis Childs exuded his assuredness Monday afternoon before getting some tosses in with his coach and older brother.

“There’s a couple of guys on the team who are good hitters, but I’m not very concerned,” he said. “I’m just looking to get those guys out and work through the other half of the lineup.”

“They’ve given us a little trouble before, but we hadn’t been hitting the ball well,” he says. “Once we do that, they really can’t compete with us.”

Furtner is pulling for it all to work out that way, because even though he is focused on the logistics of a back-to-back victory, the emotional aspect of his last games is still there.

“Being a part of the baseball team is the biggest part of me that I got out of going to college,” he says. “I consider myself first and foremost a member of the CSU baseball team. They’re not just teammates; they have become my family. It is a little bittersweet saying goodbye to it all, but hopefully we can end it on a good note and win a national championship.”

Although the seniors will not be formally acknowledged at the game, it is tradition that they celebrate them at an annual golf tournament in a couple of weeks, coach Childs knows they’ve earned a victory (or two).

“Furtner is such an excellent teammate and leader, he makes wanting to get out there and win for them easy,” he says. “All of them have put so much work in, we just want to send them out on a good day at City Park.”