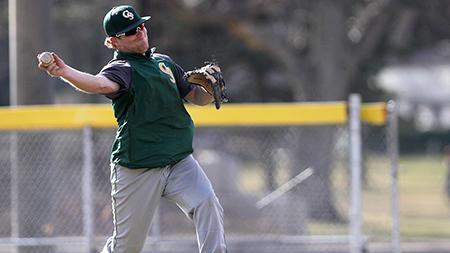 Brad Spies throws back to home base after making a catch by first base. The Rams Baseball team practiced at City Park this Thursday.

The CSU club baseball team has canceled its doubleheader with Trinidad State that was originally scheduled for Tuesday night due to inclement weather according to shortstop and team president Colton Duffy.

The games will not be rescheduled as the Rams will now shift their attention to NCBA Mid-America West Conference games, which will determine playoff seeding.

This is the second time in as many weeks that the Rams have seen a snowstorm interrupt their schedule as last week, more than a foot of snow in Fort Collins forced CSU to postpone its weekend series with Northern Colorado.

The three game series against UNC has been split up as the Rams will play the Bears once Thursday night and again in a doubleheader on April 30.

Following the first game against UNC, the Rams will play a three game series with CU-Boulder on Saturday and Sunday before the season-ending double header with the Bears.

All of CSU’s remaining games will played at City Park in Fort Collins before the NCBA playoffs begin on May 10.